The Story of Diva and Flea (Hardcover) 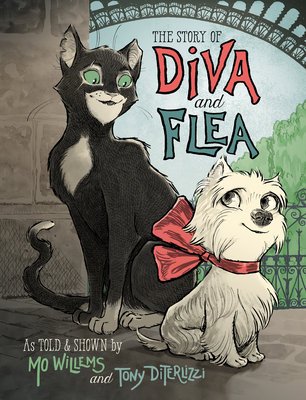 The Story of Diva and Flea (Hardcover)


Ships quickly (1-7 days)
Diva, a small yet brave dog, and Flea, a curious streetwise cat, develop an unexpected friendship in this unforgettable tale of discovery.

Mo Willems (www.pigeonpresents.com), a number one New York Times best-selling author and illustrator, has been awarded a Caldecott Honor on three occasions (for Don’t Let the Pigeon Drive the Bus!, Knuffle Bunny: A Cautionary Tale, and Knuffle Bunny Too: A Case of Mistaken Identity). Don’t Let the Pigeon Drive the Bus! was also an inaugural inductee into the Indies Choice Picture Book Hall of Fame. The celebrated Elephant & Piggie early-reader series has been awarded the Theodor Seuss Geisel Medal on two occasions (for There Is a Bird on Your Head! and Are You Ready to Play Outside?) as well as garnering four Honors (for We Are in a Book!, I Broke My Trunk!,Let's Go for a Drive! and A Big Guy Took My Ball!).

Tony DiTerlizzi (www.diterlizzi.com), a number-oneNew York Times best-selling author and illustrator, created the middle-grade series The Spiderwick Chronicles with Holly Black,which has sold millions of copies, been translated into more than 30 languages and made into a feature film. He won a Caldecott Honor for illustrating The Spider & The Fly, and in 2014 he teamed up with Lucasfilm to retell the original Star Wars trilogy in a picture book featuring artwork by Academy award-winning concept artist, Ralph McQuarrie. He lives in Amherst, Massachusetts with his wife, daughter and dog, Mimi.