I Will Not Eat You (Hardcover) 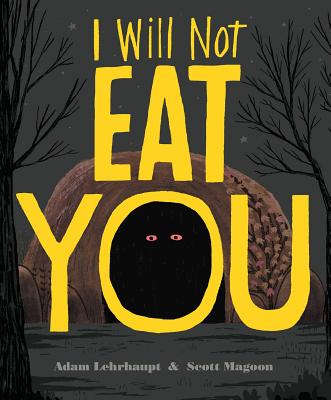 I Will Not Eat You (Hardcover)

“The dark color palette and mischievous nature of the text are reminiscent of Jon Klassen’s I Want My Hat Back (2011)—albeit with a different final outcome.” —Booklist

From the award-winning author of Warning: Do Not Open This Book! and beloved illustrator Scott Magoon comes a suspenseful and darkly funny new picture book about a creature who resists the urge to eat the animals that wander into his cave…at least for now!

Theodore thinks everything is a potential meal. Lucky for the bird, wolf, and tiger, who pass by his cave, Theodore isn’t hungry…yet. But then something new approaches. A boy. Has Theodore found a new favorite food? Or something more?
Adam Lehrhaupt’s first picture book, Warning: Do Not Open This Book!, received the E.B. White Read Aloud Honor Award, was an ALA Notable Book, and a HuffPost Notable Book. School Library Journal called it, “More fun than a barrel of monkeys.” He is also the author of Please, Open This Book!, which was named a Wanda Gag Comstock Read Aloud Honor Book, and Idea Jar. Adam has traveled to six continents, performed on Broadway, and lived on a communal farm. He currently lives in the suburbs of Philadelphia, Pennsylvania, with his wife, sons, and two bizarre dogs. Visit him online at AdamLehrhaupt.com.

Scott Magoon has illustrated many critically-acclaimed picture books, including the New York Times bestselling Rescue & Jessica by Jessica Kensky and Patrick Downes, which also received a Schneider Family Book Award, Straw by Amy Krouse Rosenthal, and Misunderstood Shark by Ame Dyckman. He is the author-illustrator of Breathe, which was named a Kirkus Reviews Best Read Aloud and a Best Book of the Year by the HuffPost and Chicago Public Library. Scott lives in the Boston area with his wife and two sons. Visit him online at ScottMagoon.com.

The dark color palette and mischievous nature of the text are reminiscent of Jon Klassen’s I Want My Hat Back (2011)—albeit with a different final outcome.
— Booklist

Magoon’s bold, angular, digitally rendered drawings capably juggle action, suspense, and comedy. . . . By focusing on Theodore’s thoughts and perspective, Lehrhaupt adds unexpected nuance to this David and Goliath story—it’s not clear who’s the aggressor and who’s the victim. What is clear is that size doesn’t matter and laughter trumps fear.
— Publishers Weekly

Smartly designed, the book features bold digital illustrations full of amusing characters and suspense. For much

of the book, only Theodore’s eyes shine out of the cave’s darkness, but they convey

everything readers need to know to catch the spirit of the story. As the well-paced,

entertaining tale unfolds, the seasons quietly change in the background, and the

own blossoming through friendship
— The Horn Book