The Abbey of the Holy Ghost: Margaret of York, Charles the Bold, and the Politics of Devotion (Paperback) 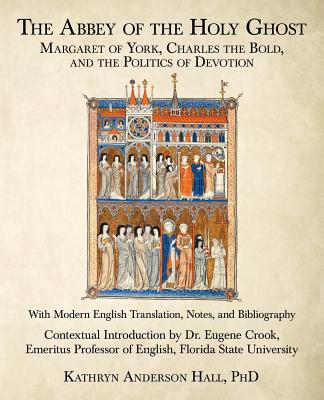 L'Abbaye du saint esprit is a medieval devotional treatise written for those who "would like to enter into religion but may not" for various reasons. The treatise seeks to aid the uncloistered reader in living a spiritual life by creating, within the reader's conscience, a metaphorical abbey in which each room represents a Christian virtue or a charitable act. After meditating on the metaphorical abbey, a devout person could symbolically carry its spiritual lessons out into the secular world.

The Abbey of the Holy Ghost: Margaret of York, Charles the Bold, and the Politics of Devotion uses original French and English manuscripts to investigate this medieval devotional treatise, which was popular in both France and England and reflects the political and devotional movements of the period-especially those observed in Margaret of York's life after she married Charles the Bold, Duke of Burgundy. Special consideration is given to additional material in the Douce 365 L'Abbaye du saint espirit commissioned by Margaret of York upon her marriage.

In addition to offering discussions of matters pertaining to the original audience of the devotions, its Victorine influence, the English lay devotion, the devotio moderna movement, and medieval women's studies generally, author Kathryn Anderson Hall also provides a new modern English translation of the Douce 365 L'Abbaye.

This edition of L'Abbaye du saint esprit offers an authoritative survey of the text's manuscripts and readership. Moreover, by setting the Douce 365 manuscript in its specific historical and political contexts and through detailed analysis, Kathryn A. Hall's meticulous study argues convincingly that this manuscript sought to influence Margaret of York and her husband Charles the Bold to soften the harsh treatment imposed on Charles's territories. In so doing, Hall reminds us that despite mysticism's professed separation from the world, it is and always has been a practice with deeply significant effects in its historical and political worlds.

Dr. Marta Kvande - Associate Professor - Director of Literary Studies - English - Texas Tech University Dr. Kathryn Anderson Hall is a Medievalist who currently writes, lectures, and gives workshops on aspects of medieval literature, especially that literature concerning the medieval mystics and saints of the Church. She holds a Ph.D. in Medieval Literature from Florida State University as well as Master's and Bachelor's degrees from Virginia Tech. While working with variations of The Abbey of the Holy Ghost in Old and Middle French as well as in Middle English manuscripts, she became interested in the medieval mystics, especially the women of that era who experienced their spirituality through bodily and emotional experiences. She has served as an Instructor and as an Adjunct Professor of English at Florida State University, taught as a Medievalist in the English Department at Valdosta State University in Georgia, and currently teaches Medieval Literature classes, contractually, for Florida State University's Osher Lifelong Learning Institute (OLLI). In addition, Dr. Hall gives lectures and leads workshops on the medieval Christian mystics for private groups, upon request. Her writings have been published in The Sixteenth Century Journal. XLIII.1 (2012): 284-285; Studies in Medieval and Renaissance Teaching. 18.2 (Fall 2011): 59-78; The South Atlantic Review. 72.4 (2008): 59-71; and Contexts and Continuities: Proceedings of the IVth International Colloquium on Christine de Pizan, Glasgow: University of Glasgow Press, 2002.