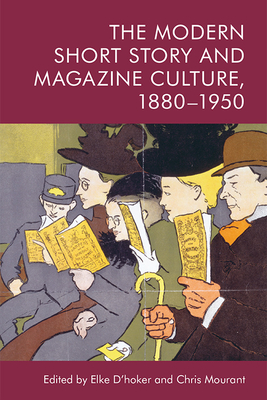 This collection of original essays highlights the intertwined fates of the modern short story and periodical culture in the period 1880-1950, the heyday of magazine short fiction in Britain. Through case studies that focus on particular magazines, short stories and authors, chapters investigate the presence, status and functioning of short stories within a variety of periodical publications - highbrow and popular, mainstream and specialised, middlebrow and avant-garde. Examining the impact of social and publishing networks on the production, dissemination and reception of short stories, it foregrounds the ways in which magazines and periodicals shaped conversations about the short story form and prompted or provoked writers into developing the genre.

Elke D'hoker is Professor of English Literature at the University of Leuven, where she co-directs the Leuven Centre for Irish Studies and the modern literature research group, MDRN. She has published widely in the field of modern and contemporary British and Irish fiction, with special emphasis on the short story and women's writing. She is the author of a critical study on John Banville (Rodopi, 2004) and Irish Women Writers and the Modern Short Story (Palgrave, 2016). She has edited several essay collections, including Unreliable Narration (De Gruyter, 2008), Mary Lavin (Irish Academic Press, 2013) and The Irish Short Story (Lang, 2015). Chris Mourant is Lecturer in Early Twentieth-Century English Literature and Co-Director of the Centre for Modernist Cultures at the University of Birmingham. He is the author of Katherine Mansfield and Periodical Culture (Edinburgh University Press, 2019) and he is an editor of the journal Modernist Cultures.