The Ethical Carnivore: My Year Killing to Eat (Hardcover) 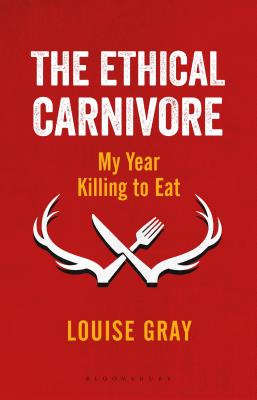 By Louise Gray
This book might be hard to find. Ask a bookseller for more information.
Out of Print

Louise's first kill is a disaster. She injures a rabbit, and thinks it has died in agony. But the experience teaches her a lesson, and when she subsequently finds the rabbit, she vows to do its death justice by finding out what it really means to kill and eat animals.

Many people claim to care about the meat that they eat, but do they really know how the animal died? The Ethical Carnivore addresses this universal question, through an emotional personal quest. Taking the current fashion for "ethical meat" to its logical conclusion, Louise vows to eat only animals she has killed herself for a year.

Starting small, Louise shoots and traps game such as hare and squirrels, and learns how to skin and cook them. She builds a new appreciation of the British countryside, and its wild fish and animals.

The narrative moves to domestic animals. Louise sees cows in the slaughterhouse; by talking to the men and women who work there, she finds out how the animals are killed and the effect it has on the people who do it on our behalf.

At the end of her journey, Louise goes wildfowling in the Orkneys to shoot a goose for Christmas dinner. She reflects that the rabbit with the white blaze has taught her to appreciate meat by facing up to the death of animals and to look deeply at her own morals and values.

Louise Gray is former Environment Correspondent at The Daily Telegraph, where she covered annual UN talks on climate change, travelled to Paraguay to investigate GM crops, and got more than one scoop on recycling. Since leaving the newspaper at the end of 2013 she has written freelance for The Sunday Times, Guardian,Country Life, and Spectator, and has appeared on BBC Radio 4 and LBC.

"An entertaining and enlightening work of environmental reporting." - Booklist

"A charming and eye-opening book" - the Guardian

"A thorough, engaging, sometimes shocking account of where our meat comes from. It is also, importantly, a book about caring." - Malachy Tallack, Caught by the River

"Louise Gray is a micromaster." - The Scotsman

"This humane, adventurous and wonderfully illuminating exploration will entertain and challenge everyone, from carnivore to vegan." - Patrick Barkham

"She writes well and this is a book that all should read – but it isn’t simply a duty, it’s a gritty pleasure." - Mark Avery

"The Ethical Carnivore is an engaging book." - Spectrum Culture