A is for Arsenic: The Poisons of Agatha Christie (Paperback) 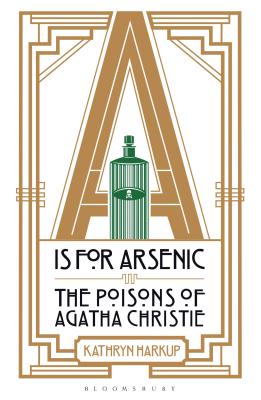 By Kathryn Harkup
Email or call for price
Out of Print

Fourteen novels. Fourteen poisons. Just because it's fiction doesn't mean it's all made-up . . .

Agatha Christie reveled in the use of poison to kill off unfortunate victims in her books; indeed, she employed it more than any other murder method, with the poison itself often being a central part of the novel. Her choice of deadly substances was far from random--the characteristics of each often provide vital clues to the discovery of the murderer. With gunshots or stabbings the cause of death is obvious, but this is not the case with poisons. How is it that some compounds prove so deadly, and in such tiny amounts?

Christie's extensive chemical knowledge provides the backdrop for A is for Arsenic, in which Kathryn Harkup investigates the poisons used by the murderer in fourteen classic Agatha Christie mysteries. It looks at why certain chemicals kill, how they interact with the body, the cases that may have inspired Christie, and the feasibility of obtaining, administering and detecting these poisons, both at the time the novel was written and today. A is for Arsenic is a celebration of the use of science by the undisputed Queen of Crime.

Kathryn Harkup is a chemist and author. Kathryn completed a doctorate on her favourite chemicals, phosphines, and went on to further postdoctoral research before realising that talking, writing and demonstrating science appealed more than hours slaving over a hot fume-hood. Kathryn is now a science communicator, giving regular public talks on the disgusting and dangerous side of science. Kathryn's first book was the international best-seller A is for Arsenic, which was shortlisted for both the International Macavity Award and the BMA Book Award.

"Remember the homicidal glee of that old Cary Grant movie 'Arsenic and Old Lace'? Those adorable aged aunts, earnestly luring lonely old men to their house so they could knock them off with poison-laced elderberry wine? If you liked that, you’ll like A IS FOR ARSENIC: THE POISONS OF AGATHA CHRISTIE; it has a little of that lethal charm . . . And while it’s essentially good book-club-style fun, the book has a practical application: For every poison, it offers some antidotes." —Washington Post

"A] scholarly and enjoyable analysis of the great author’s penchant for poison . . . if science was a banquet, then poison was her dish." —The New York Times Book Review

"Chemist Harkup delves deep into the history and science behind more than a dozen lethal substances, introducing each through its appearance in Christie’s writing. You don’t have to be familiar with the likes of Miss Marple or Hercule Poirot, however, to enjoy Harkup’s detailed, near-gleeful dip into what she calls Christie’s deadly dispensary." —Discover

"This would be a perfect reference for anyone writing murder mysteries and is scientific enough to be used as a textbook . . . The addition of real-life cases and comparisons to Christie’s works make this a nice little murder mystery of its own. Fear not, she’s careful not to spoil the endings of the classic novels." —Kirkus Reviews

"A joy to read." —FanGirl Nation