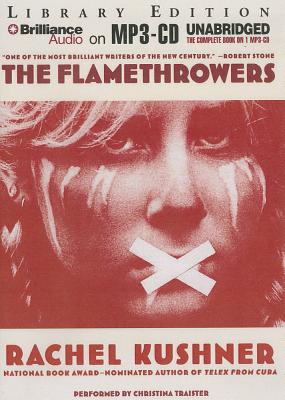 By Rachel Kushner, Christina Traister (Read by)
Email or call for price
Hard to Find

The Flamethrowers is a great American novel by way of Italy and Brazil and the esoteric, multi-cultural madhouse of the New York art world in 1975. Reno is a beautiful young artist and motorcycle enthusiast who moves to Manhattan and promptly gets swept away: by romance with the heir to an Italian tire empire, by the big personalities of the gallery scene, and eventually, by the violent revolutionaries that orbit these worlds at an ominous distance. Kushner's writing is full of muscle and velocity, and the scope she covers in this book is astounding; I'll be shocked if it doesn't become a classic. -Kea's March Staff Pick, 2014

The year is 1975 and Reno so-called because of the place of her birth has come to New York intent on turning her fascination with motorcycles and speed into art. Her arrival coincides with an explosion of activity in the art world artists have colonized a deserted and industrial SoHo, are staging actions in the East Village, and are blurring the line between life and art. Reno meets a group of dreamers and raconteurs who submit her to a sentimental education of sorts. Ardent, vulnerable, and bold, she begins an affair with an artist named Sandro Valera, the semi-estranged scion of an Italian tire and motorcycle empire. When they visit Sandro's family home in Italy, Reno falls in with members of the radical movement that overtook Italy in the seventies. Betrayal sends her reeling into a clandestine undertow.

"The Flamethrowers" is an intensely engaging exploration of the mystique of the feminine, the fake, the terrorist. At its center is Kushner's brilliantly realized protagonist, a young woman on the verge. Thrilling and fearless, this is a major American novel from a writer of spectacular talent and imagination.