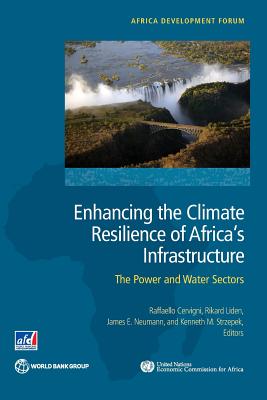 To sustain Africa's growth, and accelerate the eradication of extreme poverty, investment in infrastructure is fundamental. In 2010, the Africa Infrastructure Country Diagnostic found that to enable Africa to fill its infrastructure gap, some US$ 93 billion per year for the next decade will need to be invested. The Program for Infrastructure Development in Africa (PIDA), endorsed in 2012 by the continent's Heads of State and Government, lays out an ambitious long-term plan for closing Africa's infrastructure including trough step increases in hydroelectric power generation and water storage capacity. Much of this investment will support the construction of long-lived infrastructure (e.g. dams, power stations, irrigation canals), which may be vulnerable to changes in climatic patterns, the direction and magnitude of which remain significantly uncertain. Enhancing the Climate Resilience of Africa 's Infrastructure evaluates -using for the first time a single consistent methodology and the state-of-the-arte climate scenarios-, the impacts of climate change on hydro-power and irrigation expansion plans in Africa's main rivers basins (Niger, Senegal, Volta, Congo, Nile, Zambezi, Orange); and outlines an approach to reduce climate risks through suitable adjustments to the planning and design process. The book finds that failure to integrate climate change in the planning and design of power and water infrastructure could entail, in scenarios of drying climate conditions, losses of hydropower revenues between 5% and 60% (depending on the basin); and increases in consumer expenditure for energy up to 3 times the corresponding baseline values. In in wet climate scenarios, business-as-usual infrastructure development could lead to foregone revenues in the range of 15% to 130% of the baseline, to the extent that the larger volume of precipitation is not used to expand the production of hydropower. Despite the large uncertainty on whether drier or wetter conditions will prevail in the future in Africa, the book finds that by modifying existing investment plans to explicitly handle the risk of large climate swings, can cut in half or more the cost that would accrue by building infrastructure on the basis of the climate of the past.