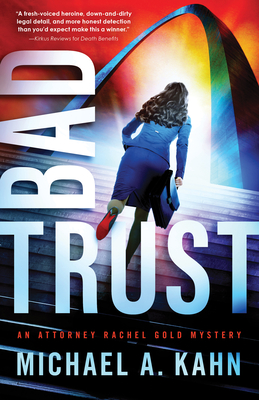 This is book number 11 in the Attorney Rachel Gold Mysteries series.

Next book in the Attorney Rachel Gold Mystery Series

An ugly trust fund dispute among siblings turns deadly when Isaiah, CEO of the family firm he stole from their father, is murdered in his office. Jewish lawyer Rachel Gold, hired to bring suit against Isaiah on behalf of his sisters, must now defend one against the charge of fratricide. But playing at detective for her legal case means getting entrenched in the complex dynamics of the Jewish family.

As Rachel and her team seek essential evidence, the widowed Rachel struggles with family issues of her own, including relationships with her young son Sam and her boyfriend Abe. The jury is still out on whether or not Rachel can create the work-life balance she is seeking.

Bad Trust, the newest addition to these riveting lawyer mysteries, is the perfect pick for fans of Lisa Scottoline and Sara Paretsky.