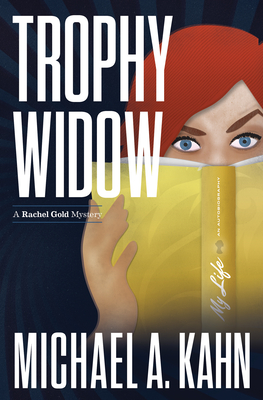 This is book number 7 in the Attorney Rachel Gold Mysteries series.

"Trophy Widow is a must read for anyone who likes a top-rate thriller." —Midwest Book Review

Savvy attorney Rachel Gold has represented a few celebrity clients in her career, but none anywhere close to Angela Green, the most famous abused housewife in America. She is surely the only former housewife to receive an award from the NAACP and an interview with Oprah while serving time for killing her husband. Her recently announced book and motion picture deal has her enmeshed in a new legal controversy—a Son of Sam lawsuit over the proceeds from that deal.

To defend her in that lawsuit, Angela retains Rachel Gold, who already has her hands full with a wacky ostrich sexual abuse case, compliments of a referral from her best friend, Benny Goldberg.

As Rachel digs into the underlying facts of the murder case, she comes across issues that were never pursued at trial—loose ends no one bothered tying up because of the dramatic nature of the incriminating evidence. Is it possible, Rachel wonders, that Angela is innocent, that she was framed by someone with an entirely different motive for killing her husband? But if Angela is really innocent, the killer is still out there—and, as Rachel soon discovers, prepared to kill again.

"Totally enthralling and believable. The plot is so complex and multi-layered that the audience won’t have a clue whom the guilty party is until the author chooses to reveal it. Trophy Widow is a must read for anyone who likes a top-rate thriller." — Midwest Book Review

"Gold can't resist getting drawn in, and readers may feel the same way about this latest legal thriller in Michael A. Kahn's Rachel Gold series, which shows off his trademark lightning repartee and captivating setup." — Publishers Weekly

"It’s a treat to see Rachel back from her extended leave of absence since Sheer Gall, and working such a meaty, satisfying case as this one…" — Kirkus Reviews