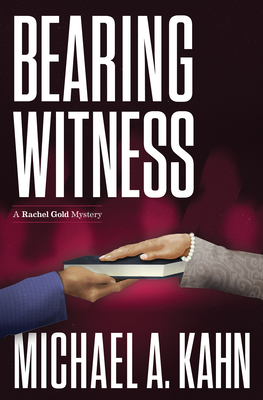 This is book number 6 in the Attorney Rachel Gold Mysteries series.

"Bearing Witness grips you from the start. If you have not read Michael Kahn's terrific legal thrillers before, you are in for a treat." —Philip Margolin, New York Times bestselling author

Rachel Gold blames it on her mother, Sarah, who convinced her to file what seemed like a simple age-discrimination case on behalf of Ruth Alpert, her mother's best friend. Ruth had been fired just shy of her sixty-third birthday by Beckmann Engineering, a corporate powerhouse known in St. Louis, both for its charitable contributions and vicious lawyers.

The first hint that the case might not be so simple comes when a key witness is gunned down in a parking lot before Rachel's eyes. The second comes when Rachel learns that Ruth has knowledge of confidential information that could transform her simple age claim into a massive, multi-million-dollar conspiracy case spanning decades.

With the help of her best friend, Benny Goldberg—the grossest (and funniest) law professor in America—the savvy and beautiful Rachel Gold struggles to make sense of a dark scheme hatched more than a fifty years ago, a conspiracy with a bloody trail of murder, mayhem, and treachery that implicates some of the wealthiest and most respected elder citizens in the country. These men have guarded their vile secret for half a century and will take whatever steps are necessary to protect it from disclosure.


"Bearing Witness grips you from the start. If you have not read Michael Kahn’s terrific legal thrillers before, you are in for a treat." — Philip Margolin, New York Times bestselling author

"The cagey attorney with ‘the mind of Brandeis and the stems of a showgirl’ is once again the alluring, and very human, heart of Mike Kahn’s latest stellar effort. I stipulate that even the lawyer-bashing Republicans in Congress will doff their caps in praise." — James Warren, Chicago Tribune

"Michael Kahn’s Rachel Gold is among the most interesting of contemporary fictional characters. In Bearing Witness, she explores a dark and seldom mentioned past." — John Lutz, New York Times bestselling author

"In this compelling thriller, Kahn makes good use of historical material and offers a revealing look at Orthodox Judaism. Rachel Gold and her eclectic entourage deserve more attention." — Booklist