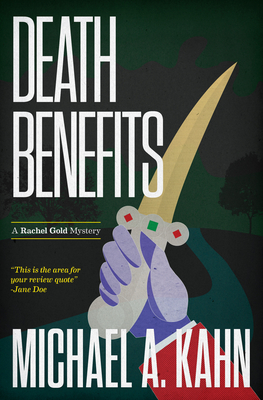 This is book number 2 in the Rachel Gold Mysteries series.

The smart and savvy Rachel Gold has established herself in Chicago legal circles as a tough litigator, when a case calls for moxie, and a discreet counselor, when a client faces what the chairman of her former firm, Abbott & Windsor, labels an awkward situation.

The odd disappearance and messy suicide of Stoddard Anderson, the managing partner of the St. Louis office of Abbott & Windsor, certainly qualifies as an awkward situation, especially when the firm learns that the only way Anderson's widow can collect the full life insurance proceeds is to prove that his death was an accident, and the only way a suicide can be an accident is if the decedent was clinically insane at the time of his death. Abbott & Windsor is, to say the least, reluctant to argue in court that the managing partner of one of its offices was clinically insane.

And thus Rachel Gold is retained to represent the widow in what all hope will be a quick resolution of a straightforward matter. But Rachel soon discovers that the supposedly stodgy Stoddard Anderson was into some decidedly unstodgy activities--sexual and otherwise. Incredibly, he may have actually located Montezuma's Executor, a legendary treasure linked to a series of grisly deaths dating back to the last Aztec emperor himself. Even more incredible, Anderson may have hidden the cursed relic in St. Louis.

With her best buddy, Benny Greenberg, in tow, Rachel sets off in search of both the Aztec treasure and a trail of evidence suggesting Stoddard Anderson's demise was not a suicide but a homicide. Rachel soon learns that she is not the only one in pursuit of Montezuma's Executor--and that she could be the next one to die for it