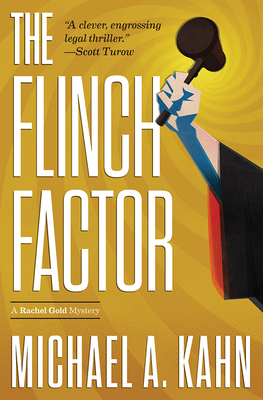 This is book number 8 in the Attorney Rachel Gold Mysteries series.

"Pick it up, but only if you can afford to lose a night's sleep, because you won't be able to put it down." —Steve Martini, author of the Paul Madriani novels

Several years have passed since we last saw stunning, savvy attorney Rachel Gold. Now she is a mother, a widow, and a reluctant participant in a lost cause: the Frankenstein Case. She represents a blue-collar neighborhood fighting a developer intent on bulldozing their homes to erect a gated community. Rachel's strategy will be based on the wacky judge on the case, known to the St. Louis Bar as "The Flinch Factor."

Then Rachel gains a new client: Susannah, sister of Nick Moran, local heartthrob. Nick has been murdered, found slumped on the front seat of his pickup along an isolated lane known as Gay Way. His female groupies are, to say the least, stunned. His sister smells foul play. A skeptical Rachel agrees to check it out and turns up facts suggesting that Nick's death was not an accident. Are Nick's death and her Frankenstein case somehow related? Can Rachel uncover the truth before more lives are lost?

"Readers will enjoy the skillful blend of suspense and humor." — Booklist