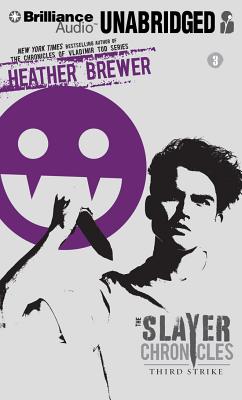 By Heather Brewer, Alexander Cendese (Performed by)
This book might be hard to find. Ask a bookseller for more information.
Hard to Find

This is book number 3 in the Slayer Chronicles (Audio) series.

In the final book of The Slayer Chronicles trilogy, Slayer Joss McMillan is home in Santa Clara when he's assigned to track down and take out a murderous vampire. But vampires aren't Joss's only trouble this summer: His girl-crazy cousin Henry is staying with him, and still holding a grudge against Joss for trying to kill his best friend, Vladimir Tod. Joss's former mentor and supposedly dead vampire, Sirus, is casting a shadow on Joss's every move. And Kat, Joss's old friend, has come back to exact revenge for past wrongs. Yet none of this compares to the devastating secret Joss discovers about the murder of his sister, Cecile. In a story full of unexpected revelations, it is up to Joss to protect the ones he loves and face the truth about his sister's death--even if it means paying the ultimate price. The Slayer Chronicles can be listened to alongside The Chronicles of Vladimir Tod or completely on their own. This thrilling conclusion will have fans racing to discover the fate of Joss the Slayer.