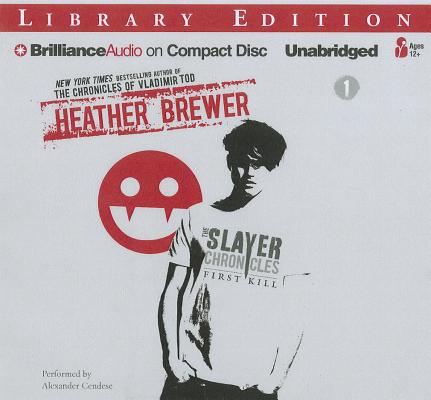 By Heather Brewer, Alexander Cendese (Read by)
$54.97
Email or call for price.

This is book number 1 in the Slayer Chronicles (Audio) series.

Joss McMillan's perfect life crashes down the night he witnesses his sister's murder--at the hands of a vampire. He then finds out his family's secret heritage: They are part of the Slayer Society, a group whose mission is to rid the world of vampires. Joss is their new recruit. As Joss trains, bent on seeking revenge for his sister, he discovers powers that could make him the youngest, strongest Slayer in history. But there is a traitor in the Society, one whose identity would shake Joss to the core...if the traitor doesn't kill him first.

The Chronicles of Vladimir Tod is still sinking its fangs into new listeners every day. Now, bestselling author Heather Brewer brings us the other side of the story, from the perspective of Vlad's former friend turned mortal enemy: vampire slayer Joss McMillan. This is the first in a series of five books that can be listened to alongside Vlad Tod or entirely on their own.