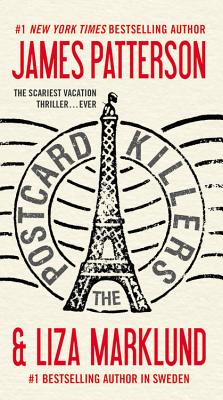 Europe is stunning in the summer . . . but NYPD detective Jacob Kanon isn't there for the beauty. He's on a mission: to track down his daughter's killer.
NYPD detective Jacob Kanon is on a tour of Europe's most gorgeous cities. But the sights aren't what draw him-he sees each museum, each cathedral, and each cafe through the eyes of his daughter's killer.
Kanon's daughter, Kimmy, and her boyfriend were murdered while on vacation in Rome. Since then, young couples in Paris, Copenhagen, Frankfurt, and Stockholm have been found dead. Little connects the murders, other than a postcard to the local newspaper that precedes each new victim.
Now Kanon teams up with the Swedish reporter, Dessie Larsson, who has just received a postcard in Stockholm-and they think they know where the next victims will be. With relentless twists and unstoppable action, The Postcard Killers may be James Patterson's most vivid and compelling thriller yet.

James Patterson has had more New York Times bestsellers than any other writer, ever, according to Guinness World Records. Since his first novel won the Edgar Award in 1977 James Patterson's books have sold more than 300 million copies. He is the author of the Alex Cross novels, the most popular detective series of the past twenty-five years, including Kiss the Girls and Along Came a Spider. He writes full-time and lives in Florida with his family.

"Patterson boils a scene down to the single, telling detail, the element that defines a character or moves the plot along. It's what fires off the movie projector in the reader's mind."
—Michael Connelly, -