Death of a Gossip (A Hamish Macbeth Mystery #1) (Mass Market) 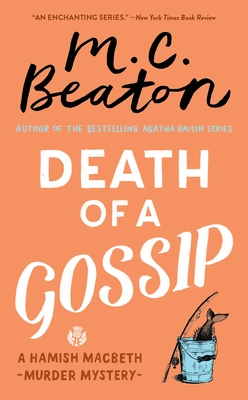 Death of a Gossip (A Hamish Macbeth Mystery #1) (Mass Market)

This is book number 1 in the A Hamish Macbeth Mystery series.

Travel to the Scotland Highlands with this classic Hamish Macbeth cozy mystery where an unladylike gossip columnist meets an untimely and watery death. From the author of the Agatha Raisin series.
When society widow and gossip columnist Lady Jane Winters joined the fishing class, she wasted no time in ruffling the feathers--or was it the fins?--of those around her. Among the victims of her sharp tongue and unladylike manner was Lochdubh Constable Hamish Macbeth. Yet not even Hamish thought someone would permanently silence Lady Jane's shrills--until her strangled body is fished out of the river.
Now with the help of the lovely Priscilla Halburton-Smythe, Hamish must angle through the choppy waters of the tattler's life to find the murderer. But with a school of suspects who aren't ready to talk and dead women telling no tales, Hamish may be in over his head, for he knows that secrets are dangerous, knowledge is power, and killers usually do strike again.
M. C. Beaton has won international acclaim for her New York Times bestselling Hamish Macbeth mysteries. The BBC has aired 24 episodes based on the series. Beaton is also the author of the bestselling Agatha Raisin series, which will air as an eight-episode dramatic series on Sky1, starring Ashley Jensen. She lives in the Cotswolds with her husband. For more information, you can visit MCBeaton.com.