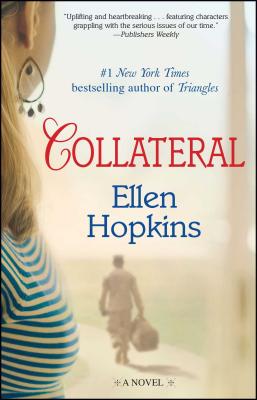 
Ships quickly (1-7 days)
From the New York Times bestselling author of the novel Triangles—a gorgeous, “raw and riveting tale of love and forgiveness” (Publishers Weekly) about a woman torn between her love for a dedicated Marine and her resentment of the war that is tearing their lives apart.

The last thing Ashley ever expected was to end up a military wife. But Cole doesn’t match her stereotype of the aggressive Marine. He’s pas­sionate and romantic, and their relationship evolves into a deeply felt, sexually charged love affair that survives four deployments. Cole desper­ately wants Ashley to marry him, but when she meets another man, a college professor, she begins to see what life might be like outside the shadow of war.

Written in Ellen Hopkins’s stunning poetic verse style, Collateral cap­tures the hearts of the soldiers on the battlefield and the minds of their friends, family, and lovers who also sacrifice their lives and happiness for their country at war. Is the collateral damage worth the fight?
Ellen Hopkins is the #1 New York Times bestselling author of numerous young adult novels, as well as the adult novels such as Triangles, Collateral, and Love Lies Beneath. She lives with her family in Carson City, Nevada, where she has founded Ventana Sierra, a nonprofit youth housing and resource initiative. Follow her on Twitter at @EllenHopkinsLit.

“Uplifting and heartbreaking... featuring characters grappling with the serious issues of our time.”
— Publishers Weekly

“Searing. . . . Hopkins examines the highs and lows of the mercurial nature of a relationship with someone whose first loyalty is to his (or her) country.”
— The Denver Post

“Hopkins examines the difficulties often overlooked in military marriages, such as limited communication, infidelity, worry over injury, loneliness, and the physical and mental issues of returning veterans. . . . The story will appeal to many readers.”
— Library Journal

“Hopkins brings much passion to her work.”
— Kirkus Reviews