Suddenly Single After 50: The Girlfriends' Guide to Navigating Loss, Restoring Hope, and Rebuilding Your Life (Hardcover) 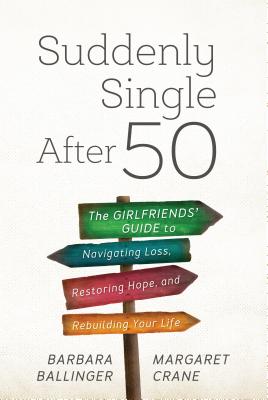 A stressful, protracted divorce. A difficult, painful death of a beloved husband. And suddenly, after age 50, you're on your own again. Your children have moved out, your parents are aging fast or deceased, your friends' lives continue onward, seemingly unchanged. Being suddenly single after age 50 can be terrifying, but eventually it can also be liberating. It can be fraught with worry and decisions you're unprepared initially to make, but it can also be a time to reevaluate, reestablish, and reinvent. It can be financially and emotionally unstable at times, but it can be the start of a new chapter, or the discovery of someone you didn't know you were, or could become, after the grief of a loss so difficult. Long-time friends and authors Barbara Ballinger and Margaret Crane have a lot in common. Both lived in the same city for years. Both are writers. Both married their husbands right out of college. Both are mothers of grown children who have left home. And both had aging parents when these difficult journeys began. Both found themselves alone, husbands lost to divorce and death, two separate situations that were equally traumatic-- for Barbara, a divorce that took four years to end, and for Margaret, a five-year, gut-wrenching siege of myriad cancers that ended in death. Barbara and Margaret struggled but discovered not only that their new lives were, indeed, worth living, but that the insight gleaned from their experiences could help other people in similar straits. The result is Suddenly Single After 50, an honest and riveting, yet funny and poignant guide that provides advice for those who find themselves divorced, widowed, or otherwise suddenly single just about the time they start getting those AARP cards in the mail and while many of their friends are gleefully discussing retirement plans and toasting milestone wedding anniversaries. Suddenly Single After 50 is told with authenticity, wit, and compassion. They discuss living alone, attending social events alone, eating by themselves, sleeping alone, walking and traveling alone, then how they also came to feel they were not alone, not really, with loyal friends and family. They share how their once right-sized houses suddenly felt empty, too big, and too full of stuff that no longer made sense. They write about all the legal and accounting woes that befell them. And they tell readers what it's like to be over 50 and dating again--after decades out of that scene, which had changed in unfathomable yet often hilarious ways. Suddenly Single After 50 addresses what life is really like when it's suddenly shaped as single. It helps readers understand the grief, frustration, and sadness alongside reawakening into the world. Anyone who finds themselves suddenly single in middle age and beyond--or knows someone who is--will find in these pages both advice and reflection, support, and a way forward.

Barbara Ballinger is an award-winning wordsmith who has interviewed a variety of celebrities and experts while covering such diverse topics as business, design, real estate, architecture, entertaining and food, law, and personal finance. Her work has appeared in numerous publications, including the Chicago Tribune, House Beautiful, the New York Times, National Association of Realtors (R). and MultiFamily Executive. Barbara blogs at WhyThatMuch and The Bare Root, and speaks at conferences and on various media, including "The Oprah Winfrey Show" and "The Nancy Glass Radio Show." She and co-author Margaret wrote their first book together about family business, Corporate Bloodlines: The Future of The Family Firm. Barbara's most recent book before Suddenly Single After 50 was written with garden expert Michael Glassman, The Garden Bible: Designing your perfect outdoor space. Margaret Crane is a nationally-known freelance writer focusing on business, food, wine, finance, real estate, and home furnishings. She has interviewed such luminaries as Virginia Johnson, Jack Buck, Dr. Benjamin Spock, Moshe Dayan, Shimon Peres, Tippi Hedren, Sally Quinn, and many more. Most recently she worked as a senior writer and researcher for a large Midwestern nonprofit. Her work has appeared in a wide variety of publications, including the New York Times, Midwest Living, Newsweek, and The Wine Spectator. With more than a half dozen titles to her credit, Margaret's latest book is The Kitchen Bible. In addition, she writes and maintains the weekly blog, lifelessonsat50plus, with co-author Barbara.