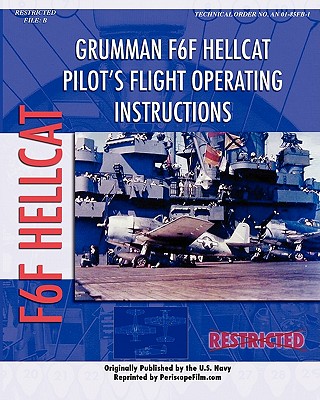 By United States Navy
$14.95
Not on our shelves at the moment, but we will order it for you.
(This book cannot be returned.)

The most successful naval fighter in history, the Grumman F6F Hellcat accounted for nearly 5200 kills during WWII. Designed to replace the F4F Wildcat, the Hellcat featured many improvements including self-sealing fuel tanks, a bullet-proof windscreen, and hydraulic landing gear. The plane was rugged, and carried over 200 pounds of armor. Despite the extra weight, it was maneuverable and fast, thanks to a 2000 hp engine. The F6F boasted six .50 caliber machine guns, and could carry 2000 lbs. of bombs. Nearly 12,300 F6Fs were built. They first saw action at Tarawa, and subsequently flew in every battle of the Pacific campaign including the Turkey Shoot. Hellcats accounted for nearly 75% of all aircraft kills in the Pacific. Originally created by the U.S. Navy, this flight manual taught pilots everything they needed to know before entering the cockpit. Please note, some color diagrams appear in black and white. Care has been taken however to preserve the integrity of the text.