We Begin at the End (Large Print / Paperback) 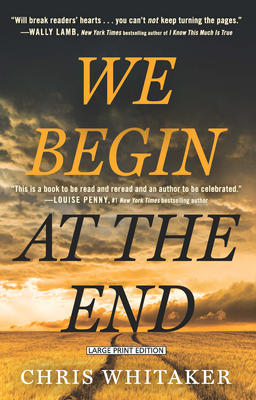 We Begin at the End (Large Print / Paperback)

“We Begin at the End is dramatic storytelling at its best, full of layers of intrigue and complex personalities set around the murder of the book’s most vulnerable character. The stoical, 13-year-old Duchess Day Radley takes center stage, and her heartbreaking life unleashes a hero within: self-proclaimed outlaw, bold and courageous, though to her peril not always wise beyond her years. Chris Whitaker has created a character for the ages and an extraordinary reading experience. By turns amusing, frightening, and exhilarating.”
— Robin Sung, Porter Square Books, Cambridge, MA

"A vibrant, engrossing, unputdownable thriller that packs a serious emotional punch. One of those rare books that surprise you along the way and then linger in your mind long after you have finished it."
--Kristin Hannah, #1 New York Times bestselling author of The Nightingale and The Four Winds

Right. Wrong. Life is lived somewhere in between.

Duchess Day Radley is a thirteen-year-old self-proclaimed outlaw. Rules are for other people. She is the fierce protector of her five-year-old brother, Robin, and the parent to her mother, Star, a single mom incapable of taking care of herself, let alone her two kids. Walk has never left the coastal California town where he and Star grew up. He may have become the chief of police, but he's still trying to heal the old wound of having given the testimony that sent his best friend, Vincent King, to prison decades before. And he's in overdrive protecting Duchess and her brother. Now, thirty years later, Vincent is being released. And Duchess and Walk must face the trouble that comes with his return. Chris Whitaker's We Begin at the End is an extraordinary novel about two kinds of families--the ones we are born into and the ones we create.
Chris Whitaker lives in the United Kingdom with his wife and three young children. His books include Tall Oaks and All the Wicked Girls. Follow Chris on Twitter @WhittyAuthor.