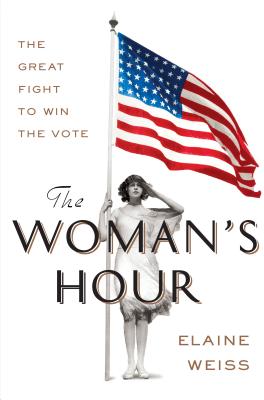 “Over the course of two steamy weeks in August 1920, hordes of suffragists, anti-suffragists, lobbyists, and lawmakers descended on Nashville in a fight to make Tennessee the 36th and final state to ratify the 19th Amendment, giving women the right to vote. This was the final chance, and both sides would do whatever it took to win - bullying, bribery, blackmail, and even kidnapping. I was on the edge of my seat. I had no idea how close the suffragists came to losing. This is narrative nonfiction at its best.”
— Lisa Wright, Oblong Books And Music,LLC., Millerton, NY

Nashville, August 1920. Thirty-five states have ratified the Nineteenth Amendment, twelve have rejected or refused to vote. One last state is needed. After a seven-decade suffragist crusade, it all comes down to Tennessee. Following the remarkable women who led their forces into battle, The Woman's Hour is an inspiring story of activists winning one of the last campaigns forged in the shadow of the Civil War, and the beginning of the great twentieth-century battles for civil rights.

Elaine Weiss is an award-winning journalist and writer whose work has appeared in The Atlantic, Harper's, The New York Times, and The Christian Science Monitor, as well as in reports and documentaries for National Public Radio and Voice of America. A MacDowell Colony Fellow and Pushcart Prize Editor's Choice honoree, she is also the author of Fruits of Victory: The Woman's Land Army in the Great War (Potomac Books/University of Nebraska Press).