A Rule Against Murder: A Chief Inspector Gamache Novel (CD-Audio) 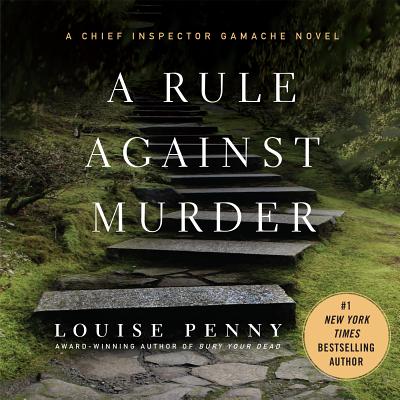 A Rule Against Murder: A Chief Inspector Gamache Novel (CD-Audio)

This is book number 4 in the Chief Inspector Gamache Novel series.

“This is the fourth book in the utterly charming, utterly compelling series featuring Quebec's Chief Inspector Gamache. In this one, he and his wife visit an isolated resort for their wedding anniversary, becoming embroiled in the inner workings of a more-than-dysfunctional family. Penny's gorgeous prose and stunning skill with character development take this book to the top of the genre.”
— Robin Agnew, Aunt Agatha's Ltd., Ann Arbor, MI

"Celebrated British narrator and actor Ralph Cosham brings this wonderful murder mystery to life and draws in listeners with his charisma.... the Old World quality of his voice invokes radio murder mysteries from decades past, creating an endlessly entertaining listening experience." — Publishers Weekly

It is the height of summer, and Armand and Reine-Marie Gamache are celebrating their wedding anniversary at Manoir Bellechasse, an isolated, luxurious inn not far from the village of Three Pines. But they're not alone. The Finney family—rich, cultured, and respectable—has also arrived for a celebration of their own.

The beautiful Manoir Bellechasse might be surrounded by nature, but there is something unnatural looming. As the heat rises and the humidity closes in, some surprising guests turn up at the family reunion, and a terrible summer storm leaves behind a dead body. It is up to Chief Inspector Gamache to unearth secrets long buried and hatreds hidden behind polite smiles. The chase takes him to Three Pines, into the dark corners of his own life, and finally to a harrowing climax.

LOUISE PENNY is the author of the #1 New York Times, USA Today, and Globe and Mail bestselling series of Chief Inspector Armand Gamache novels, and coauthor with Hillary Rodham Clinton of the #1 New York Times bestselling thriller State of Terror. She has won numerous awards, including a CWA Dagger and the Agatha Award (eight times), and was a finalist for the Edgar Award for Best Novel. In 2017, she received the Order of Canada for her contributions to Canadian culture. Louise lives in a small village south of Montréal.

Ralph Cosham is best known as the voice behind all of Louise Penny’s bestselling Chief Inspector Gamache novels. He won the 2013 Audie Award for Louise Penny’s A Beautiful Mystery. He is a film, stage, and voice actor who narrated over 100 audiobooks, including Frankenstein, Around the World in Eighty Days, Alice in Wonderland, and Watership Down. His audiobook credits include works by C.S. Lewis, Simon Brett and C.S. Forester.  Several of his works have been awarded Audio Best of the Year by Publisher’s Weekly.