Pity the Billionaire: The Hard-Times Swindle and the Unlikely Comeback of the Right (Compact Disc) 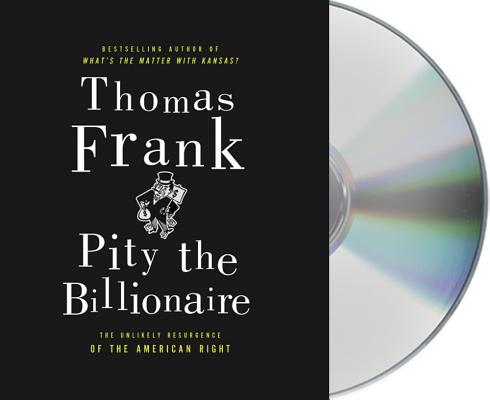 From the bestselling author of What's the Matter with Kansas?, a wonderfully insightful and sardonic look at how the worst economy since the 1930s has brought about the revival of conservatism

Economic catastrophe usually brings social protest and demands for change—or at least it's supposed to. But when Thomas Frank set out in 2009 to look for expressions of American discontent, all he could find were loud demands that the economic system be made even harsher on the recession's victims and that society's traditional winners receive even grander prizes. The American right, which had seemed moribund after the election of 2008, was strangely reinvigorated by the arrival of hard times. The Tea Party movement demanded not that we question the failed system but that we reaffirm our commitment to it. Republicans in Congress embarked on a bold strategy of total opposition to the liberal state. And TV phenom Glenn Beck demonstrated the commercial potential of heroic paranoia and the purest libertarian economics.

In Pity the Billionaire, Frank, the great chronicler of American paradox, examines the peculiar mechanism by which dire economic circumstances have delivered wildly unexpected political results. Using firsthand reporting, a deep knowledge of the American right, and a wicked sense of humor, he gives us the first full diagnosis of the cultural malady that has transformed collapse into profit, reconceived the Founding Fathers as heroes from an Ayn Rand novel, and enlisted the powerless in a fan club for the prosperous. What it portends is ominous for both our economic health and our democracy.

Thomas Frank is the author of "Pity the Billionaire," "The Wrecking Crew," "What's the Matter with Kansas?," and "One Market Under God." A former opinion columnist for "The Wall Street Journal," Frank is the founding editor of "The Baffler" and a monthly columnist for "Harper's." He lives outside Washington, D.C.

“[Frank’s narration] adds a connection to the author whose purpose seems most passionate.” – Sound Commentary

“[Frank’s] knowledge and enthusiasm for his subject matter are immediately evident to listeners. The result is not unlike listening to a political pundit on television.” – AudioFile Magazine

“Narrator Oliver Wyman hits the right tone, blending mock naïveté and sarcasm with indignation for breezy listening on a heavy topic…With writing aimed at the ear and a strong reading, listening is the way to go for this hot book.” –Audiofile on The Wrecking Crew