That Used to Be Us: How America Fell Behind in the World It Invented and How We Can Come Back (Compact Disc) 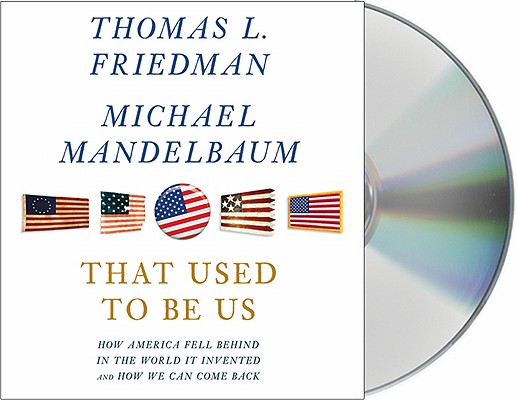 America is in trouble. We face four major challenges on which our future depends, and we are failing to meet them and if we delay any longer, soon it will be too late for us to pass along the American dream to future generations.
In "That Used to Be Us," Thomas L. Friedman, one of our most influential columnists, and Michael Mandelbaum, one of our leading foreign policy thinkers, offer both a wake-up call and a call to collective action. They analyze the four challenges we face globalization, the revolution in information technology, the nation's chronic deficits, and our pattern of excessive energy consumption and spell out what we need to do "now "to sustain the American dream and preserve American power in the world. They explain how the end of the Cold War blinded the nation to the need to address these issues seriously, and how China's educational successes, industrial might, and technological prowess remind us of the ways in which "that used to be us." They explain how the paralysis of our political system and the erosion of key American values have made it impossible for us to carry out the policies the country urgently needs.
And yet Friedman and Mandelbaum believe that the recovery of American greatness is within reach. They show how America's history, when properly understood, offers a five-part formula for prosperity that will enable us to cope successfully with the challenges we face. They offer vivid profiles of individuals who have not lost sight of the American habits of bold thought and dramatic action. They propose a clear way out of the trap into which the country has fallen, a way that includes the rediscovery of some of our most vital traditions and the creation of a new thirdparty movement to galvanize the country.
"That Used to Be Us "is both a searching exploration of the American condition today and a rousing manifesto for American renewal.

Thomas L. Friedman is an internationally renowned author, reporter, and columnist the recipient of three Pulitzer Prizes and the author of five bestselling books, among them "From Beirut to Jerusalem" and "The World Is Flat."He was born in Minneapolis in 1953, and grew up in the middle-class Minneapolis suburb of St. Louis Park. He graduated from Brandeis University in 1975 with a degree in Mediterranean studies, attended St. Antony's College, Oxford, on a Marshall Scholarship, and received an M.Phil. degree in modern Middle East studies from Oxford. After three years with United Press International, he joined "The New York Times," where he has worked ever since as a reporter, correspondent, bureau chief, and columnist. At the "Times," he has won three Pulitzer Prizes: in 1983 for international reporting (from Lebanon), in 1988 for international reporting (from Israel), and in 2002 for his columns after the September 11th attacks. Friedman's first book, "From Beirut to Jerusalem," won the National Book Award in 1989. His second book, "The Lexus and the Olive Tree: Understanding Globalization" (1999), won the Overseas Press Club Award for best book on foreign policy in 2000. In 2002 FSG published a collection of his Pulitzer Prize-winning columns, along with a diary he kept after 9/11, as "Longitudes and Attitudes: Exploring the World After September 11." His fourth book, "The World Is Flat: A Brief History of the Twenty-first Century" (2005) became a #1 "New York Times" bestseller and received the inaugural Financial Times/Goldman Sachs Business Book of the Year Award in November 2005. A revised and expanded edition was published in hardcover in 2006 and in 2007. "The World Is Flat" has sold more than 4 million copies in thirty-seven languages. In 2008 he brought out "Hot, Flat, and Crowded," which was published in a revised edition a year later. His sixth book, "That Used to Be Us: How America Fell Behind in the World It Invented and How We Can Come Back," co-written with Michael Mandelbaum, was published in September 2011.Michael Mandelbaum, the Christian A. Herter Professor and Director of American Foreign Policy at The Johns Hopkins University School of Advanced International Studies, is the author or coauthor of twelve books, including "The Ideas That Conquered the World.""

“[In That Used to Be Us there] are big truths, and the authors see them clearly and whole. As is usual in Mr. Friedman’s work the power of the core argument is buttressed by detailed reportage and blizzards of specific fact and detail, but the accumulation of anecdote and evidence never detracts from the book’s central thrust. That Used to Be Us is an important contribution to an intensifying debate, and it deserves the widest possible attention.” —Walter Russell Mead, The New York Times

“Friedman and Mandelbaum are men of the American elite, and they write to salute those members of the American elite who behave public-spiritedly and to scourge those who do not. They are winners, writing to urge other winners to have more of a care for their fellow citizens who are not winners. And you know what? There’s nothing wrong with that! . . . American society has had a big serving of that ugly anti-elitist spirit in the recent past. It could use more of the generous responsible spirit Friedman and Mandelbaum recommend.” —David Frum, The New York Times Book Review

“This is a book of exceptional importance, written on a sweeping scale with remarkable clarity by two of our most gifted thinkers. A soon-to-be best seller, it should be read by policymakers and every American concerned about our country's future.” —Elizabeth L. Winter, Library Journal