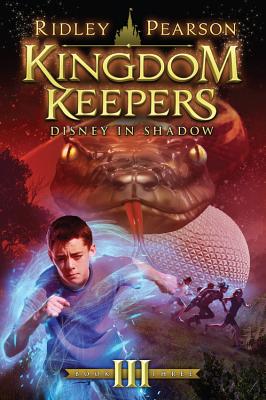 From award winning author, Ridley Pearson comes the 3rd installment in the New York Times Best-Selling series, Kingdom Keepers.
With the adventures set forth in the first books now behind them, Kingdom Keepers 3: Disney In Shadow follows the five teens, Finn, Philby, Willa, Charlene, and Maybeck as they search to find Wayne, their mentor and head Imagineer who has mysteriously gone missing. Concerned Wayne has been abducted by the Overtakers—Disney villains, who along with other Disney characters, take over the parks when the turnstiles stop spinning, and want desperately to steer the parks to a far darker place—the five kids pick up a major clue from a close friend, Jess, whose dreams (nightmares, really) often accurately predict the future.

The very few clues from Jess’s dream lead the kids into Disney’s Hollywood Studios and Epcot--through imaginary worlds that become real, by imaginary kids who are real. Each clue seems tied to the last, and with the stakes growing ever higher, what starts out as a puzzle ends up as a fight for their lives. Through a transparent paper box, a quest for a sword, rides on Soarin' and Maelstrom, life-and-death encounters with giant snakes, and a devious Maleficent, the Kingdom Keepers not only begin to decipher deeper meanings to the clues, but discover new truths about themselves and their ever-growing friendships.

Tristan Elwell was born and raised in New York City, where he graduated from the High School of Music and Art. He attended the School of Visual Arts on a full scholarship, graduating in 1990 at the top of his class. While at SVA he also worked as a painting assistant to noted photo realist Charles Bell. After college he quickly established his career as an illustrator. In 1994 he joined the staff at SVA, where he teaches illustration and painting. He has done book covers for all the major publishing houses, including Avon, Bantam, HarperCollins, Penguin, Pocket Books, Scholastic, and Tor.