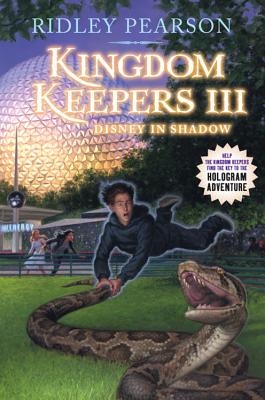 When Disney Imagineers installed hologram guides for the Magic Kingdom using teenage models, they had no idea the technology might backfire. But backfire it did: some nights when the kids go to sleep, they wake up in one of the Disney parks as a hologram.
With the adventures in the first books now resolved, Kingdom Keepers III: Disney in Shadow follows the five teens—Finn, Philby, Willa, Charlene, and Maybeck—as they search to find Wayne, their mentor and head Imagineer, who has mysteriously gone missing. Concerned that Wayne has been abducted by the Overtakers—Disney villains, who along with other Disney characters, take over the parks when the turnstiles stop spinning and who want desperately to steer the parks to a far darker place—the five kids pick up a major
clue from their close friend whose dreams (nightmares, really) often accurately predict the future.
Clues from a dream lead the kids into Disney’s Hollywood Studios and Epcot. Each clue seems tied to the last, and with the stakes growing ever higher, what starts out as a puzzle ends up as a fight for survival. A transparent paper box, a quest for a sword, rides on Soarin’ and Maelstrom, life-and-death encounters with a giant snake and a devious Maleficent lead the Kingdom Keepers not only to begin to decipher deeper meanings to the clues but to discover new truths about themselves and their ever-growing friendships.

Ridley Pearson is the award-winning coauthor, along with Dave Barry, of Peter and the Starcatchers; Peter and the Shadow Thieves; Peter and the Secret of Rundoon; Peter and the Sword of Mercy; Escape From the Carnivale; Cave of the Dark Wind; Blood Tide; and Science Fair. In addition to Kingdom Keepers: Disney After Dark; Kingdom Keepers II: Disney at Dawn; and the Kingdom Keepers III: Disney in Shadow, he has written the young adult thrillers Steel Trapp: The Challenge and Steel Trapp: The Academy. He has written more than twenty best-selling crime novels, including Killer View and Killer Weekend. He was the first American to be awarded the Raymond Chandler/Fulbright Fellowship in Detective Fiction at Oxford University.