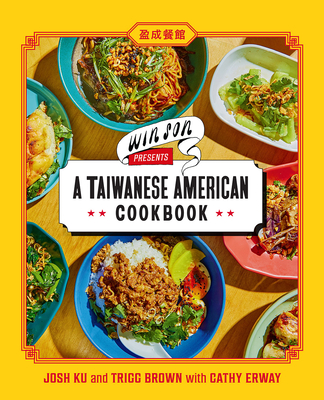 Josh Ku, born in Queens to parents from southern Taiwan, and Trigg Brown, a native Virginian whose mentor was a Taiwanese-American chef, forged a friendship over food—specifically, excellent tsang ying tou, or "flies’ head," a dish of chopped budding chives kissed with pork fat. Their obsession with Taiwanese food and culture propelled them to open Win Son together in 2016. The East Williamsburg restaurant quickly established itself as a destination and often incurs long waits for their vibrant and flavorful Taiwanese-American cuisine.

Ku and Brown have teamed up with Cathy Erway, Taiwanese food expert and celebrated writer, to create this book which explores and celebrates the cuisine of Taiwan and its ever-simmering pot of creative influences. Told through the eyes, taste buds, travels, and busy lives of Ku, Brown, and Erway, this book brings the cuisine of this misunderstood island nation into the spotlight. With 100 creative, yet accessible recipes, this book will unravel the history of this diaspora cuisine. While featuring classic dishes and well-known favorites, this cookbook also stretches this cuisine's definition, introducing new dishes with brazen twists that are fun, flavorful, and decidedly American-born in style.
Josh Ku, co-owner of Win Son and Win Son Bakery, is a multitalented former property and construction manager from Long Island. Win Son (meaning “abundance”) is named after Josh’s grandfather’s former textile company in Taiwan. Trigg Brown is the chef and co-owner of Win Son. He worked under Taiwanese-American chef Pei Chang at Keswick Hall and Golf Club, who introduced him to the island nation and encouraged him to advance his culinary talents. Brown has also worked at several esteemed restaurants, including Colicchio & Sons, Craft, and Upland. Cathy Erway is a James Beard Award–winning food writer and author of The Food of Taiwan,the first cookbook from a major US publisher to explore the food culture of Taiwan. As an expert on the subject, Erway has written about Taiwanese food in publications including TASTE, Eater, Food & Wine, New York magazine, Bon Appetit, Lucky Peach, and more.

"Josh and Trigg have made Taiwanese American food approachable for any home cook."—TOM COLICCHIO, chef and owner of Crafted Hospitality

"This book is as much a celebration of Taiwanese culture and cuisine as it is Win Son."—EDDIE HUANG, bestselling author and chef

"The food at Win Son and in this book is so vibrant and so damned delicious, you will want to scrape the bowls clean."—CLAUS MEYER, cofounder of Noma

“Josh and Trigg changed my life. Ever since my first bite of their Big Chicken Bun, I’ve seen the world from a whole new perspective.”

“Whenever I’m asked for restaurant recommendations, Win Son is the place I send people to. To be able to cook my menu favorites at home is the absolute best and to read the stories behind the dishes is even better.”

“Josh and Trigg showed me, a Taipei native, a fresh and delicious perspective on Taiwanese food, which is gorgeously captured throughout this book.”

“This book shows how a small but mighty Brooklyn restaurant has earned its place in Taiwan’s ever- changing food landscape.”

—BIN CHEN AND ANDREW CHAU, cofounders of Boba Guys and authors of The Boba Book