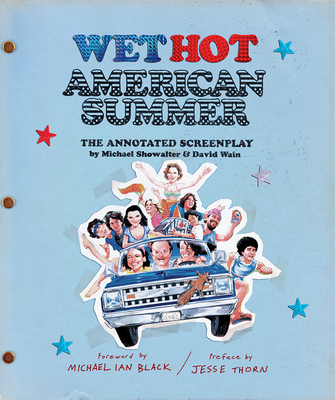 At long last, this is the definitive Wet Hot American Summer book fans have been clamoring for! Screenwriters David Wain and Michael Showalter take pen to page and create a hilarious, behind-the-scenes annotated version of the original screenplay that launched a thousand Halloween costumes. They provide commentary on and insight into how and why they made the artistic decisions they did while writing and filming the movie that went on to become a true cult classic, as well as an ongoing Netflix series. The book will also feature reproduced ephemera from filming—photos, original (and scathing) reviews, AIM chat conversations, marked up script pages, and so much more. Written and curated by Wain and Showalter, this will be the must-have guide to all things Wet Hot.

Michael Showalter and David Wain are both American comedians/writers/directors/actors. They were members of the sketch comedy troupe The State before co-creating Wet Hot American Summer (both the original movie and the Netflix series). They also co-created the TV series Stella and the movie They Came Together. Wain directed several other movies, including Role Models and A Futile and Stupid Gesture. Showalter’s directorial credits include Hello My Name is Doris and last year’s Oscar-nominated hit The Big Sick. They both live in LA.

Michael Showalter is a comedian, actor, writer, and director. He lives in New York.

“Wet Hot American Summeris one of the funniest films ever made. This is a must-read for any fan of comedy out there.”
— Rachel Bloom

“Watching Wet Hot American Summer for the first time was an ‘Aha’ moment for me. The blend of physical comedy—bizarrely specific—and wildly heightened characters made me see the vast possibilities within the world of making comedy, and making comedy with your friends.”
— Abbi Jacobson

“I saw Wet Hot American Summeropening weekend and it blew my comedy mind. And now this book has blown my book-about-classic-cult-comedy-with-insights-and-anecdotes-that-really-elevate-the-whole-experience-of-something-I-already-loved mind.”
— Nick Kroll

“If you love the movieWet Hot American Summeras much as I do, but for some reason don’t like watching it, then I guess this is the perfect book for you.”
— B. J. Novak