The Coen Brothers: This Book Really Ties the Films Together (Hardcover) 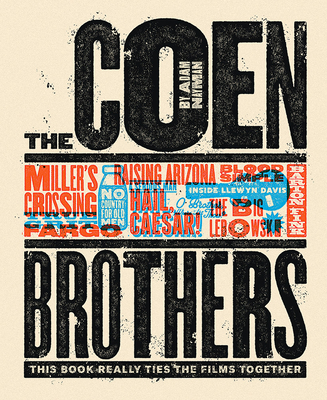 Great for Coen fanatics and film lovers in general. Film critic Adam Nayman provides insight into each of their films through essays, interviews and infographics. Quirky design, loads of information and a lot of fun. - Drew

Adam Nayman is a contributing editor for Cinema Scope and writes on film for The Ringer, Sight and Sound, Reverse Shot, and Little White Lies. He has written books on Showgirls and the films of Ben Wheatley, and lectures on cinema and journalism at the University of Toronto and Ryerson University.

“...it would make a great gift for any Coen fan-boy or fan-girl in your life.”
— NPR's Pop Culture Happy Hour

“..this detailed compendium is a cinephile’s delight.”

“Packed with full page color stills, behind-the-scenes stories, interviews and insightful analysis of each film, this book will put a smile on the face of all film buffs.”
— The Detroit Free Press

"...a deep dive into the Coen cinematic universe."
— PureWow

“...this book is sure to please the ultimate Coen brothers fan.”

"...a king-sized guide to the filmmaker’s offbeat oeuvre combining critical text, biography, close film analysis, and enlightening interviews with key Coen collaborators all in one big package."
— The Playlist