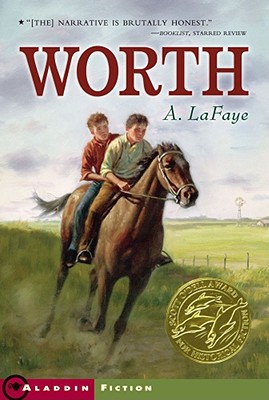 
Backordered
Before the accident Nathaniel's life seemed pretty good. His help around the farm made his father proud. But now, with a busted leg, Nathaniel can't do farmwork anymore, so his father adopts another son through the Orphan Train. Feeling replaced and useless, Nathaniel attends school for the first time. Meanwhile, sturdy and strong John is able to do the work that earns Pa's attention.

But the truth is, John Worth has his own set of troubles. He is treated more like a servant than a son. Kept awake at night by nightmares of his family's death, he remembers having a pa who took pride in him. But now he has no one, until a community battle and a special book reveal a potential friend -- and a chance for understanding.
A. LaFaye (the "A" is for Alexandria) is the author of Worth, for which she received the Scott O'Dell Award, as well as The Year of the Sawdust Man, Nissa's Place, The Strength of Saints, Edith Shay, Strawberry Hill, and Dad, in Spirit. She teaches at California State University at San Bernardino during the school year and at Hollins University in Roanoke, Virginia, in the summer. She lives in Cabot, Arkansas.