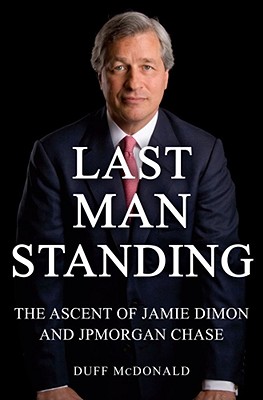 By Duff McDonald
Email or call for price
Special Order

In the midst of this disastrous economic climate, one executive has weathered the storm more deftly than any other: Jamie Dimon, chairman and CEO of JPMorgan Chase, considered the dominant fi gure on Wall Street. Dimon's eleventh-hour acquisition, in 2008, of fl ailing archrival Bear Stearns stunned the world. Even more incredible: JPMorgan's continued success in the face of an industry-wide meltdown that has seen its CEO become a paragon of finance.

In Last Man Standing, award-winning journalist Duff McDonald chronicles Dimon's tumultuous rise: from his joining the legendary Sandy Weill at American Express fresh out of Harvard Business School to their building of Citigroup (and Dimon's unceremonious ouster) to his rescue of Bank One and, at the unprecedented age of forty-eight, his ascension to the top post at JPMorgan Chase -- a bank he transformed from a broken institution to the sine qua non of global banking in five short years.

Upon gaining unfettered access to Dimon, McDonald spent countless hours interviewing him and his full circle of family, friends, and colleagues to provide an unprecedented and deeply personal look at this extraordinary figure. Moving beyond Dimon's "fortress" balance sheets, McDonald reveals a dedicated family man whose uncanny facility with numbers and tireless work ethic are complemented by fierce loyalty and an unrelenting aversion to offi ce politics. Dimon, for the first time, shares detailed insights on the heart of his business and management philosophies, and industry titans such as Weill and Warren Buffett offer their analyses of his career.

At a time when Dimon's competitors watch their companies crumble, JPMorgan not only continues to weather the worst period in the history of Wall Street but is growing by leaps and bounds. The defi nitive biography of Jamie Dimon, Last Man Standing is by far the most comprehensive portrait of the only man in fi nance today who can be called an American hero.