Woman of Valor: Margaret Sanger and the Birth Control Movement in America (Paperback) 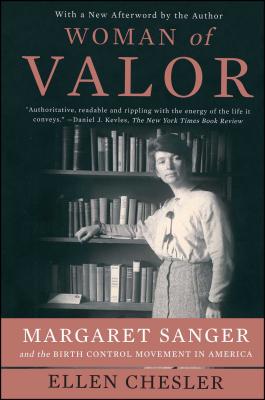 This illuminating biography of Margaret Sanger—the woman who fought for birth control in America—describes her childhood, her private life, her relationships with Emma Goldman and John Reed, her public role, and more.

Margaret Sanger went to jail in 1917 for distributing contraceptives to immigrant women in a makeshift clinic in Brooklyn. She died a half-century later, just after the Supreme Court guaranteed constitutional protection for the use of contraceptives. Now, Ellen Chesler provides an authoritative and widely acclaimed biography of this great emancipator, whose lifelong struggle helped women gain control over their own bodies.

An idealist who mastered practical politics, Sanger seized on contraception as the key to redistributing power to women in the bedroom, the home, and the community. For fifty years, she battled formidable opponents ranging from the US Government to the Catholic Church. Her crusade was both passionate and paradoxical. She was an advocate of female solidarity who often preferred the company of men; an adoring mother who abandoned her children; a socialist who became a registered Republican; a sexual adventurer who remained an incurable romantic. Her comrades-in-arms included Emma Goldman and John Reed; her lovers, Havelock Ellis and H.G. Wells.

Drawing on new information from archives and interviews, Chesler illuminates Sanger’s turbulent personal story as well as the history of the birth control movement. An intimate biography of a visionary rebel, Woman of Valor is also an epic story that extends from the radical movements of pre-World War I to the family planning initiatives of the Great Society. At a time when women’s reproductive and sexual autonomy is once again under attack, this landmark biography is indispensable reading for the generations in debt to Sanger for the freedoms they take for granted.

Ellen Chesler is a distinguished lecturer and director of the Eleanor Roosevelt Initiative on Women and Public Life at Roosevelt House, the public policy center of Hunter College of the City University of New York. Woman of Valor was a finalist for PEN’s 1993 Martha Albrand Prize for the year’s best first work of nonfiction.

"Authoritative, readable and rippling with the energy of the life it conveys." -- Daniel J. Kevles, The New York Times Book Review

"The Sanger portrayed by Chesler is compelling, and persuasively counters the tendency of earlier biographers to either eulogize or condemn...Chesler's exhaustive scholarship has yielded not only a fuller picture of Sanger but new knowledge about the history of birth control." -- Rosalind Pollack Petchesky, Boston Sunday Globe

"Woman of Valor's chief virtue is a sweeping and authoritative grasp not only of Sanger's life but of the political detail and maneuvering behind it." -- Ruth Brandon, The Washington Post Book World

"Chesler illuminates Sanger's rich personal and public life with a sophisticated understanding of psychology and history, yet the book reads like a good novel." -- Sylvia A. Law, Professor of Law, New York University