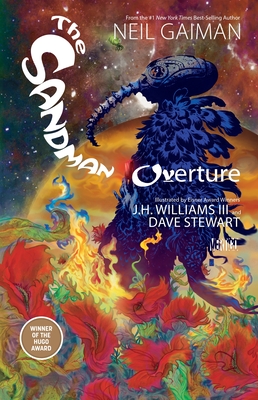 A concentrated blast of unbridled imagination. If you know Neil Gaiman mainly from his novels and short stories, you're missing out on some of his most masterful and inventive writing. Enter a world where Dream is a being and stars are capable of thoughts, feelings, and sometimes madness that can devour worlds. The Sandman Overture, being a prequel, works as an excellent self-contained entry point to a sprawling epic that can often seem intimidating to delve into. Add J.H. Williams III's mind-bending hallucinogenic art to Gaiman's dizzying amount of ideas per page, and have you a feast for the eyes and mind not to be missed.

Winner of the 2016 Hugo Award for Best Graphic Story

Twenty-five years since The Sandman first changed the landscape of modern comics, Neil Gaiman's legendary series is back in this never-before-told tale featuring Morpheus!

The Sandman: Overture heralds New York Times best-selling writer Neil Gaiman's return to the art form that made him famous, ably abetted by artistic luminary JH Williams III (Batwoman, Promethea), whose lush, widescreen images provide an epic scope to The Sandman's origin story. From the birth of a galaxy to the moment that Morpheus is captured, The Sandman: Overture will feature cameo appearances by fan-favorite characters such as The Corinthian, Merv Pumpkinhead and, of course, the Dream King's siblings: Death, Desire, Despair, Delirium, Destruction and Destiny.

Neil Gaiman is the New York Times best-selling author of the Newbery Medal-winning The Graveyard Book and Coraline, the basis for the hit movie. His other books include Anansi Boys, Neverwhere, American Gods and Stardust (winner of the American Library Association's Alex Award as one of 2000's top novels for young adults) and the short story collections M Is for Magic and Smoke and Mirrors. He is also the author of The Wolves in the Walls and The Day I Traded My Dad for Two Goldfish, both written for children, as well as the creator of the most critically acclaimed comic series of all-time, The Sandman. Among his many awards are the Eisner, the Hugo, the Nebula, the World Fantasy and the Bram Stoker. Originally from England, he now lives in the United States.

“Expansive and atmospheric, jammed with brainy, contemplative moments and dry humor…. Gaiman’s vivid, wild imagination is grounded in Williams’ and Stewart’s beautiful, captivating artwork…. Sandman fans will surely be elated not only by the return to the story but also by the stunning, gorgeous artwork, which outshines the original.”­­­ —Booklist

"Dream is a long way from his realm, but for me reading this comic feels exactly like coming home." —The Guardian

"Sandman: Overture may go down as one of the best-drawn chapters in Sandman's already legendary run." —Newsarama