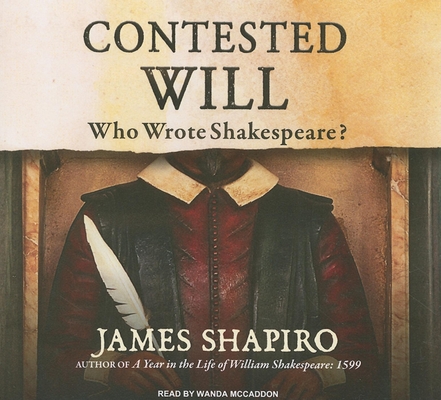 By James Shapiro, Wanda McCaddon (Narrated by)
Email or call for price
Out of Print

For nearly two centuries, the authorship of William Shakespeare's plays has been challenged by writers and artists as diverse as Sigmund Freud, Mark Twain, Henry James, Helen Keller, Orson Welles, Malcolm X, and Sir Derek Jacobi. How could a young man from rural Warwickshire, lacking a university education, write some of the greatest works in the English language? How do we explain the seemingly unbridgeable gap between Shakespeare's life and works? Contested Will unravels the mystery of Shakespeare's authorship, retracing why and when doubts first arose, what's at stake in the controversy for how we value Shakespeare's achievement, and why, in the end, there can be no doubt about who wrote the plays.

James Shapiro is the Larry Miller Professor of English at Columbia University and the author of four books, including "A Year in the Life of William Shakespeare: 1599," which won the BBC Samuel Johnson Prize in the United Kingdom.

Wanda McCaddon has narrated well over six hundred titles for major audio publishers and has earned more than twenty-five Earphones Awards from "AudioFile" magazine. She has also won a coveted Audie Award, and "AudioFile" has named her one of recording's Golden Voices.

"With lucid writing for the common reader, with sense, and with respect toward those with whom he rightly disagrees, Shapiro tells how this whole mishegas got started, and then, with unbelievable patience, shows how it has not a shred of a breath of a hope of being anything." ---Philadelphia Inquirer