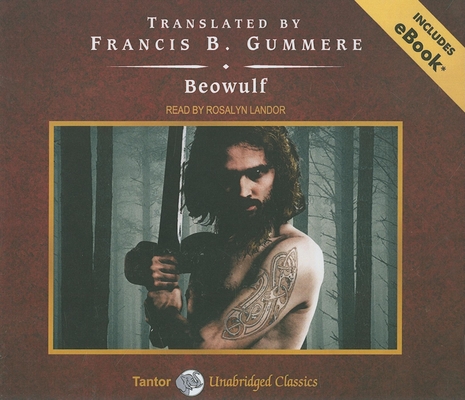 When sleep was at its deepest, night at its blackest, up from the mist-filled marsh came Grendel stalking... Thus begins the battle between good and evil, for lying in wait and anxious to challenge the ogre Grendel is a young man, strong-willed and fire-hearted. This man is Beowulf, whose heroic dragon-slaying deeds were sung in the courts of Anglo-Saxon England more than a thousand years ago. Beowulf is our only native English heroic epic. In the figure of Beowulf, the Scandinavian warrior, and his struggles against monsters, the unknown author depicts the life and outlook of a pagan age. The poem is a subtle blending of themes-the conflict of good and evil, and an examination of heroism. Its skillful arrangement of incidents and use of contrast and parallel show it to be the product of a highly sophisticated culture. This version of Beowulf is the translation by Francis B. Gummere.

Rosalyn Landor has worked as an actress since the age of seven, both in Europe and the United States. She is an Audie Award nominee and winner, and she has won several "AudioFile" Earphones Awards. Rosalyn has also been chosen by "AudioFile" magazine as a Best Voice of 2009 and 2010.

"The way [Rosalyn Landor] phrases the majestic syntax makes this a more accessible version of the seminal classic." ---AudioFile