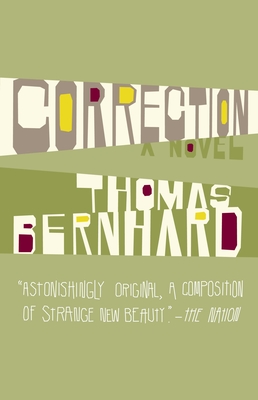 
Special Order
The scientist Roithamer has dedicated the last six years of his life to “the Cone,” an edifice of mathematically exact construction that he has erected in the center of his family’s estate in honor of his beloved sister. Not long after its completion, he takes his own life. As an unnamed friend pieces together—literally, from thousands of slips of papers and one troubling manuscript—the puzzle of Rotheimer’s breakdown, what emerges is the story of a genius ceaselessly compelled to correct and refine his perceptions until the only logical conclusion is the negation of his own soul.

Considered by many critics to be Thomas Bernhard’s masterpiece, Correction is a cunningly crafted and unforgettable meditation on the tension between the desire for perfection and the knowledge that it is unattainable.
Thomas Bernhard was born in Holland in 1931 and grew up in Austria. He studied music at the Akademie Mozarteum in Salzburg. In 1957 he began a second career, as a playwright, poet, and novelist. The winner of the three most distinguished and coveted literary prizes awarded in Germany, he has become one of the most widely translated and admired writers of his generation. He published nine novels, an autobiography, one volume of poetry, four collections of short stories, and six volumes of plays. Thomas Bernhard died in Austria in 1989.

“Astonishingly original, a composition of strange new beauty.”
—The Nation

“As readers we are in the relentless grip of Bernhard. One marvels at the consistency of his austere vision.”
—The New York Times Book Review

“Little by little, with supernatural patience, prodigious cunning and craft—like Joseph Heller in Catch-22—Bernhard fashions an original angle of vision that transforms our understanding. We see elephants beside us in a room where no one mentions elephants.”
—John Edgar Wideman, O, The Oprah Magazine