The Upper Case: Trouble in Capital City (Private I) (Hardcover) 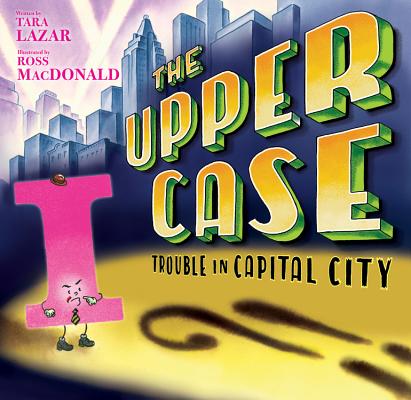 By Tara Lazar, Ross MacDonald (Illustrator)
$17.99
On Our Shelves Now

Just when Private I thinks all is calm-now that he's cracked the case of 7 Ate 9-Question Mark storms into the office.
Mark is worried. All the uppercase letters are M-I-S-S-I-N-G! But that's absurd. This is CAPITAL City!
Private I is the last letter standing. Will he solve his BIGGEST mystery yet, the UPPER CASE, before it's too late?!
Filled with the same humor, wit, and quirkiness of the hit 7 Ate 9: The Untold Story, comes another laugh-out-loud whodunit.

Tara Lazar is the author of 7 Ate 9: The Untold Story, The Monstore, Little Read Gliding Hood, and a plethora of other picture books. She lives in New Jersey with her husband, two daughters, and a quirky sense of humor. The Upper Case is the second book in the Private I series. Learn more at taralazar.com

Ross MacDonald is the author and illustrator of Bad Baby, Henry's Hand, Achoo! Bang!: The Noisy Alphabet, and Another Perfect Day. He was also the illustrator of 7 Ate 9: The Untold Story, the first book in the Private I series. Ross has created illustrations and humor pieces for periodicals such as Vanity Fair, the New York Times, the New Yorker, Newsweek, Time, Spy, and Rolling Stone. He was born and raised in Canada and now lives in Connecticut. Learn more at ross-macdonald.com.