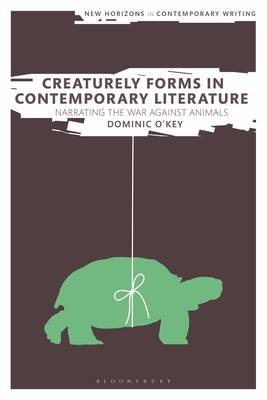 We are living through a period of planetary crisis, a time in which the mass production and consumption of some animals is made possible by the mass extinction of many others. What is the role of literature in responding to this war against animals? How might literary criticism read for animals?

In Creaturely Forms in Contemporary Literature, Dominic O'Key develops the bold argument that deep attention to literary form enables us to rethink human-animal relations. Through chapters on W. G. Sebald, J. M. Coetzee and Mahasweta Devi, as well as close readings of works by Arundhati Roy and Richard Powers, O'Key reveals how literary forms can unsettle the fictions of human supremacy and craft alternative, creaturely forms of relation. An intervention into both the humanism of literary theory and the representational focus of animal studies, this provocative work makes the case for a new formalism in light of our obligation to fellow creatures.
Dominic O'Ley is a Postdoctoral Research Fellow at the University of Leeds, UK. He is currently working on a two-year research project, funded by the AHRC, titled 'Thinking Through Extinction'.