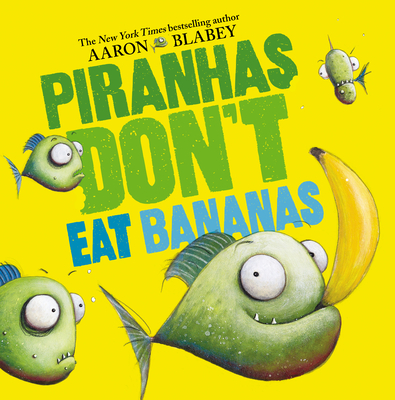 Find out what piranhas eat -- and don't eat! -- in this new, irresistibly funny picture book from Aaron Blabey, the bestselling creator of Pig the Pug!
Everyone knows that piranhas don't eat bananas -- except for Brian. This little fish loves to munch not only on bananas, but on fruit of all kinds! Brian's piranha friends think he's crazy. Piranhas don't eat bananas -- their sharp teeth are for eating meat! And there's a scrumptious pair of feet dangling in the water nearby...

Aaron Blabey has written many well-loved, bestselling books for children. He is the creator of three hugely successful series for children -- the New York Times bestselling The Bad Guys, Pig the Pug, and Thelma the Unicorn. In 2018 it was announced that a movie adaptation of The Bad Guys is in development at DreamWorks Animation with Aaron serving as an executive producer on the project. Aaron's books have won many awards, including nine REAL Awards, an INDIE Book Award for Children's Book of the Year, a Children's Book Council of Australia -- Book of the Year Award, a NSW Premiers Literary Award for Children's Literature, two Australian Book Design Awards, and a Children's Peace Literature Award.

"A surefire storytime hit, hand this madcap reimagining of Green Eggs and Ham to preschoolers and emergent readers." -- Booklist


Praise for Pig the Winner:

"The goggle-eyed cartoon illustrations are fun, funny, and appealingly grotesque in their exaggerated goofiness, and they are a good match for the rhyming text." -- Kirkus Reviews


Praise for Pig the Pug: