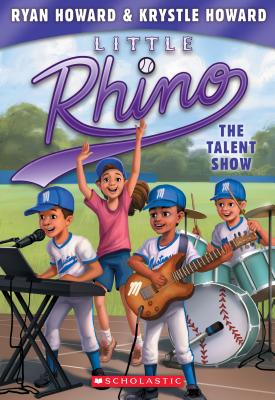 This is book number 4 in the Little Rhino series.

When Rhino and Cooper overhear their shy teammate, Carlos, singing in the dugout, they are amazed at how good he is! There's a talent show coming up at school and Carlos just might be good enough to win it. They decide to form a band with Carlos as the lead singer, Cooper on drums, and Rhino on the guitar.

But Rhino hasn't told his friends that he has only just started taking guitar lessons. He knows a few notes, which is very different from playing a full song. Between schoolwork, baseball practice, and the talent show . . . will Rhino be able to learn in time?