How to Bake a Universe (Hardcover) 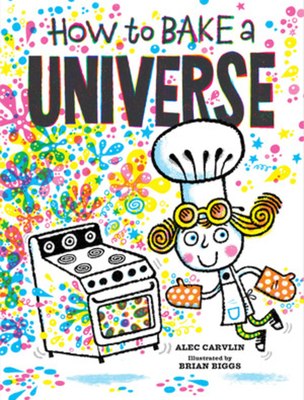 How to Bake a Universe (Hardcover)

This whimsical and informed debut picture book takes a leaf from a cookbook to show readers how the universe came into being.

To bake a universe, you’ll need a heaping pile of nothing. That’s right, not a single thing!

Just make sure you have enough . . . Alec Carvlin breaks down the Big Bang into the steps of a recipe, from the formation of quarks and atoms (preheat your oven to Absolute Hot) to the compression of gases into stars and planets (just set your timer for 180 million years). Carvlin expertly balances mind-boggling facts with snappy storytelling, and Brian Biggs’s bold and contagiously cheerful illustrations bring the infinite down to the bite-sized. How to Bake a Universe is an accessible and playful authority on the formation of the universe and a heartfelt commentary on how to live in it.

Alec Carvlin is an author and designer who graduated from Dartmouth College with a BA in classical studies. How to Bake a Universe is his debut picture book. He lives outside Boston.

Brian Biggs is a children’s book creator who has collaborated with authors like Jon Scieszka, Mac Barnett, and Katherine Applegate. He lives in Philadelphia with his wife.