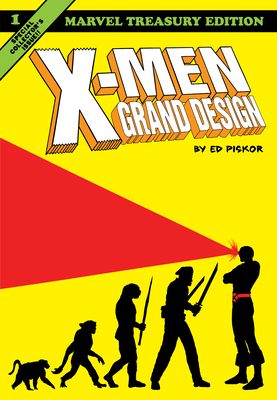 Sworn to protect a world that fears and hates them.” The X-Men have long been a stand out of the super-hero genre with mutants as something of a metaphor for the struggles of socially marginalized communities, but at its heart, the X-Men universe is sci-fi soap opera with complicated continuity, a large cast of misfit characters, retcons, and multiple alternate timelines that converge on each other which make for a world that can be intimidating to jump into for new readers but is a large part of the appeal for fans of the franchise such as myself. Ed Piskor’s Grand Design looks to streamline that unwieldy continuity, and make accessible almost 60 years of serialized stories into a concise narrative without shying away from the campiness of the era that spawned the original stories, and the anachronistic nature of Marvel continuity illustrated in his unique, funky, retro Silver Age style.

If I had to deliver an oral presentation on one subject on short notice, I could go on for hours about the X-Men, from the social significance of the mutant metaphor, how no other super-hero comic series does soap opera better, to how it's best to just embrace the sometimes bonkers continuity and alternate realities. Ed Piskor manages to streamline all the complicated working parts that make Marvel's mutants often overwhelming, confusing, but oh-so-wonderful into this gorgeously retro-styled mini series. - Jim

Over six tumultuous decades, the X-Men have carved a singular place in comic book lore and popular culture. From their riotous birth in the '60s, to their legendary reboot in the '70s, to their attitude adjustment in the '90s, to their battle against extinction in the '00s, the X-Men have remained unquestionably relevant to generations of readers, the ultimate underdogs in an increasingly complicated world. Now, New York Times-best-selling author Ed Piskor (Hip-Hop Family Tree, Wizzywig) takes you on a pulse-pounding tour of X-Men history unlike anything you've ever experienced before, an intricate labor of love that stitches together hundreds of classic and obscure stories into one seamless masterpiece of X-Men lore. This volume collects X-MEN: GRAND DESIGN and includes X-MEN #1 from 1963, masterfully recolored by Ed, along with other extras including recolored classic pinups. Presented in the same dynamic, oversized format of the best-selling Hip Hop Family Tree.