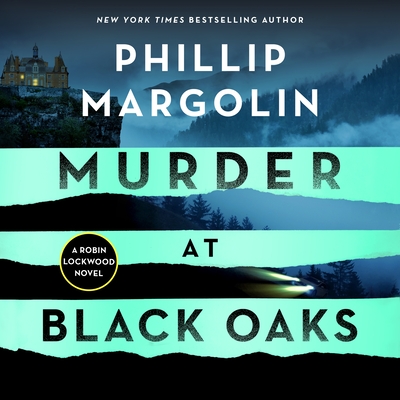 This is book number 6 in the Robin Lockwood series.

In Phillip Margolin's Murder at Black Oaks, Attorney Robin Lockwood finds herself at an isolated retreat in the Oregon mountains, one with a tragic past and a legendary curse, and surrounded by many suspects and confronted with an impossible crime.

Defense Attorney Robin Lockwood is summoned by retired District Attorney Francis Melville to meet with him at Black Oaks, the manor he owns up in the Oregon mountains. The manor has an interesting history - originally built in 1628 in England, there's a murderous legend and curse attached to the mansion. Melville, however, wants Lockwood's help in a legal matter - righting a wrongful conviction from his days as a DA. A young man, Jose Alvarez, was convicted of murdering his girlfriend only for Melville, years later when in private practice, to have a client of his admit to the murder and to framing the man Melville convicted. Unable to reveal what he knew due to attorney client confidence, Melville now wants Lockwood's help in getting that conviction overturned.

Successful in their efforts, Melville invites Lockwood up to Black Oaks for a celebration. Lockwood finds herself among an odd group of invitees - including the bitter, newly released, Alvarez. When Melville is found murdered, with a knife connected to the original curse, Lockwood finds herself faced with a conundrum - who is the murder among them and how to stop them before there's another victim.

PHILLIP MARGOLIN has written over twenty novels, most of them New York Times bestsellers, including Gone But Not Forgotten, Lost Lake, and Violent Crimes. In addition to being a novelist, he was a long time criminal defense attorney with decades of trial experience, including a large number of capital cases. Margolin lives in Portland, Oregon.