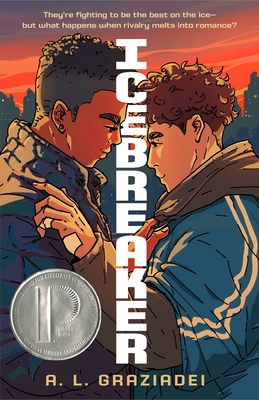 By A. L. Graziadei

A. L. Graziadei's Icebreaker is an irresistible YA debut about two hockey players fighting to be the best—and the romance that catches them by surprise along the way.

Seventeen-year-old Mickey James III is a college freshman, a brother to five sisters, and a hockey legacy. With a father and a grandfather who have gone down in NHL history, Mickey is almost guaranteed the league's top draft spot.

The only person standing in his way is Jaysen Caulfield, a contender for the #1 spot and Mickey's infuriating (and infuriatingly attractive) teammate. When rivalry turns to something more, Mickey will have to decide what he really wants, and what he's willing to risk for it.

This is a story about falling in love, finding your team (on and off the ice), and choosing your own path.

A.L. Graziadei was born in Buffalo, New York and raised on Sabres hockey and video games, using their free time to write books inspired by both. Now living in Wisconsin, A.L. still plays plenty of video games and is a proud member of the Displaced Buffalo Sabres Fans group. Icebreaker is their first book.