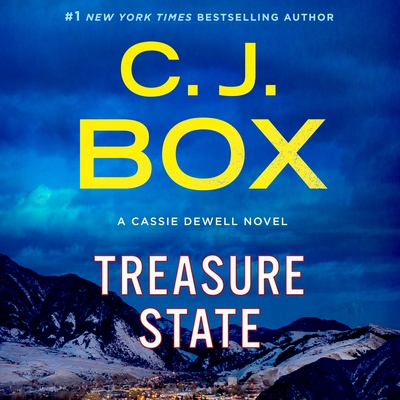 This is book number 6 in the Cassie Dewell Novels series.

Christina Delaine's spot-on performance ensures that Box's story and dialogue are as entertaining as ever." —AudioFile on C.J. Box's The Bitterroots

Private Investigator Cassie Dewell’s business is thriving, and her latest case puts her on the hunt for a slippery con man who’s disappeared somewhere in the “treasure state”. A wealthy Florida widow has accused him of absconding with her fortune, and wants Cassie to find him and get it back. The trail takes Cassie to Anaconda, Montana, a quirky former copper mining town that’s the perfect place to reinvent yourself. As the case develops, Cassie begins to wonder if her client is telling her everything.

On top of that, Cassie is also working what's easily one of her strangest assignments ever. A poem that promises buried treasure to one lucky adventurer has led to a cutthroat competition and five deaths among treasure-hunters. But Cassie’s client doesn’t want the treasure. Instead, he claims to be the one who hid the gold and wrote the poem. And he’s hired Cassie to try to find him. Between the two cases, Cassie has her hands full.

In Montana, a killer view can mean more than just the scenery, and Cassie knows much darker things hide behind the picturesque landscape of Big Sky Country. Treasure State, C. J. Box's highly anticipated follow-up to The Bitterroots, is full of more twists and turns than the switchbacks through the Anaconda Range.

Christina Delaine is a SOVAS Voice Arts Award and multiple AudioFile Earphones Award-winning narrator who has recorded over 100 audiobooks. She is also an Audie Award nominee. An accomplished stage and voice actor, Delaine has appeared on stages across the country and has voiced scores of commercials and video games.