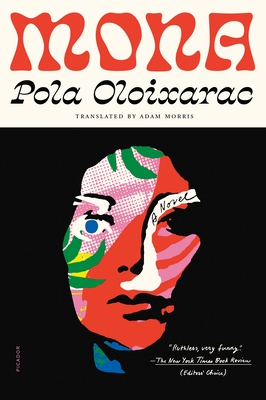 Reading Mona is like smoking from a vaporizer. Inhale deeply. Laugh. Smile. Feel more insightful than before. And keep your fingers crossed. In the end, things might veer toward the darkness. (This is the good stuff.)

From Pola Oloixarac, the critically acclaimed author of Savage Theories and Dark Constellations, comes Mona, in which success as a “writer of color” proves to be a fresh hell for a young Latin American woman at a literary conference in Sweden.

Mona, a Peruvian writer based in California, presents a tough and sardonic exterior. She likes drugs and cigarettes, and when she learns that she is something of an anthropological curiosity—a woman writer of color treasured at her university for the flourish of rarefied diversity she brings—she pokes fun at American academic culture and its fixation on identity.

When she is nominated for “the most important literary award in Europe,” Mona sees a chance to escape her downward spiral of sunlit substance abuse and erotic distraction, so she trades the temptations of California for a small, gray village in Sweden, close to the Arctic Circle. Now she is stuck in the company of all her jet-lagged—and mostly male—competitors, arriving from Japan, France, Armenia, Iran, and Colombia. Isolated as they are, the writers do what writers do: exchange compliments, nurse envy and private resentments, stab rivals in the back, and hop in bed together. All the while, Mona keeps stumbling across the mysterious traces of a violence she cannot explain.

As her adventures in Scandinavia unfold, Mona finds that she has not so much escaped her demons as locked herself up with them in the middle of nowhere. In Mona, Pola Oloixarac paints a hypnotic, scabrous, and ultimately jaw-dropping portrait of a woman facing down a hipster elite to which she does and does not belong. A survivor of both patronization and bizarre sexual encounters, Mona is a new kind of feminist. But her past won’t stay past, and strange forces are working to deliver her the test of a lifetime.

Pola Oloixarac was born in Buenos Aires in 1977. Her debut novel, Savage Theories, was a breakout bestseller in Argentina and was nominated for the Best Translated Book Award, and in 2010, Granta recognized her as one of the best young Spanish-language novelists. She was awarded the 2021 Eccles Centre & Hay Festival Writer's Award. Oloixarac is a regular contributor to The New York Times, and her fiction has appeared in Granta, n+1, The White Review, and an issue of Freeman's on "The Future of New Writing." Pre­viously a resident of San Francisco, California, she currently resides in Barcelona.

Chosen as a Best Book of the Year by the New York Public Library, Bookforum, AV Club, Lit Hub, Thrillist, and Redbook

"Both a wicked satire of the literary élite and an exploration of art and violence . . . The novel is the kind that Mona imagines writing: 'terrifying, brilliant, and dangerous.'" —The New Yorker

"Beneath her irony and glamor, one gets the sense that much of Mona’s life is spent seeking out ways to staunch different kinds of pain. The book’s end provides startling, perfect chaos, with Mona’s world ripping apart exactly in a way you think it won’t." —Keziah Weir, Vanity Fair

“There is something further going on in Mona, another form of thinking, that takes literary theory and physical violence and, however improbably, merges them into a wild and fantastical form: one that doesn’t just try to articulate violence and its repression but also to find some kind of hopefulness through it . . . Oloixarac’s writing is exciting because of its total commitment to maxing out ideas, its demonstration that ideas can move through a novel in various ways—not only through dialogue and narration but also through descriptions and minor similes—and be transformed, in the same way a character may be.” —Adam Thirlwell, London Review of Books

"Oloixarac frequently made me laugh out loud. There are moments so casually well observed—hat-tip to her translator, Adam Morris—that you're almost eager to prolong the conference . . . Clearly, this is a world the author knows all too well." —Sadie Stein, The New York Times Book Review

"A brutally observed satire of literary society and a tragic story of how identity can be commodified, Mona is a daring new work from one of Argentina’s most exciting novelists.” —Adrienne Westenfeld, Esquire

"Dense with clever analysis of the modes and mannerisms of literary society—readings that resemble postmodern performance art, dalliances that swing from Hay to Cartagena—Mona is the kind of novel you read with a sense that you’re in on some very juicy gossip." —Chloe Schama, Vogue

"Oloixarac is an ace Dorothy Parker, with long knives drawn, who nonetheless can’t help feeling the weight of the tragedies that lead to comedy . . . Razor-sharp and evocative . . . The author continually makes the ordinary feel surprising." —Alex McLevy, AV Club

“Engaging and challenging . . . Oloixarac offers an illuminating critique of the business of literature . . . [and] calls for . . . writing as a commitment to people and some version of love, without descending into pabulum or cliché.” —Yxta Maya Murray, Los Angeles Review of Books

“Mona could be labeled a satire of the contemporary world literature circuit, but that description would miss the psychological unease that undergirds every academic exchange. Its conclusion could be called absurdist, but everything that precedes it is eminently sensible. Oloixarac seems intent on locating a style that defies the conformism her characters succumb to . . . [Mona occupies a] space of tension, striving for sentiment and feeling while portraying the fragmentary texture of contemporary life.” —Jasmine Liu, Full Stop

"[Oloixarac] is very sharp and witty, her observations provocative . . . Oloixarac makes you feel smarter just by reading her . . . When it comes to satire, she takes no prisoners . . . Oloixarac has her thumb on what’s happening now in our increasingly international and diverse culture." —Ed Meek, ArtsFuse

"Oloixarac is thoughtful and also hilarious in her writing: her multilingual wordplays are iconic . . . In writing, as in life, the true challenge facing anyone with something to say is to challenge the interlocutor just enough. Oloixarac's story is brilliant because it makes you wonder how much is enough." —Ana Clara Ribeiro, PopMatters

“Pola Oloixarac is an Argentine satirist, though that designation may not go far enough to capture the degree to which she dismantles her subjects. Theorist might be more appropriate, if we were to cast back to the time when theorists like Michel Foucault or Gayatri Spivak were the great disenchanters of the world . . . Mona is the rage of a purist . . . [It is] a welcome change, to read an author for whom writing that isn’t ecstatic may as well have been written by Google.” —Nicholas Bredie, Air/Light

“Like Garcia Márquez did in One Hundred Years of Solitude, Oloixarac weaves mythology into Mona, tipping her cap to a popular Norse myth in the epic ending . . . Oloixarac’s inimitable talents are paving the way for a new movement.” —Wayne Catan, On the Seawall

“With controlled emotion that builds to a devastating ending, Mona uncovers the complexities of a post-feminist generation . . . A celebrated young Peruvian writer attends a Swedish literary festival in this intelligent and provocative novel that skewers intelligentsia and acute self-indulgence.” —Cindy Pauldine, Shelf Awareness

"Smart, provocative . . . The rich inner life of its namesake character propels this vibrant examination of the writing world." —Publishers Weekly

"Oloixarac delivers a scathing indictment of the book circuit . . . Mona emerges as an intriguing subject, a woman who worries that the sum of her talents distills down to nothing more than her potent yet fragile sexuality." —Poornima Apte, Booklist

"A rapturous tour de force by Pola Oloixarac—one of the few writers I cannot live without—Mona is that novel that, once finished, leaves its reader perfectly, beautifully undone. Part mystery, part send-up of a literary world, part journey into night, Mona reminds us that no matter how far you fly, the past is always near. If Mona were any smarter, any funnier, any truer, I'm not sure my tender heart could have taken it." —Junot Diaz, author of This is How You Lose Her

"Sly, bitter, and smart, Mona is at once a satirical comedy, a harrowing psychological portrait of a woman’s dissociation, and a philosophical indictment of the hubris of now. Read it and be surprised." —Siri Hustvedt, author of Memories of the Future

"Pola Oloixarac's Mona is, simultaneously, a hilarious satire of literary pretensions, a sincere exploration of a damaged psyche, and a brilliantly unnerving new chapter in this writer's inimitable body of work. It reads as though Rachel Cusk's Outline Trilogy was thrown in a blender with Roberto Bolaño's 2666, and then lightly seasoned with the bitter flavor of Horacio Castellanos Moya. In other words: Oloixarac is one of my new favorite writers." —Andrew Martin, author of Cool for America

"International literary gatherings are ripe for sharp satire, but they're never as hilariously funny, weird, and adorable as the one portrayed in Mona. Brainy, cheerfully dirty, and caught in a fine mess, Mona herself, like this novel, is exhilarating company." —Francisco Goldman, author of Say Her Name

"A provocative, defiant, clever, painful, empowering, hilarious novel of literary climax and sexual healing. Mona is like a sauna: you better not enter with your clothes on, or without a birch switch." —Valerie Miles, translator and co-founder of Granta en Español

Praise for Pola Oloixarac
"Pola Oloixarac is one of the great writers of the Internet, the only country larger than Argentina." —Joshua Cohen, author of Moving Kings

"Oloixarac’s wit and ambition are evident on every page. By comparison, most other contemporary fiction seems a little dull and simple-minded." —Hari Kunzru, author of White Tears