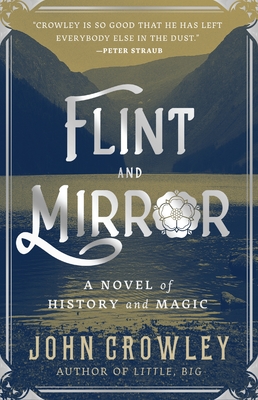 "Crowley is generous, obsessed, fascinating, gripping. Really, I think Crowley is so good that he has left everybody else in the dust."—Peter Straub

From award-winning author John Crowley comes a novel that masterfully blends history and magic in Flint and Mirror.

As ancient Irish clans fought to preserve their lands and their way of life, the Queen and her generals fought to tame the wild land and make it English.

Hugh O'Neill, lord of the North, dubbed Earl of Tyrone by the Queen, is a divided man: the Queen gives to Hugh her love, and her commandments, through a little mirror of obsidian which he can never discard; and the ancient peoples of Ireland arise from their underworld to make Hugh their champion, the token of their vow a chip of flint.

From the masterful author of Little, Big comes an exquisite fantasy of heartbreaking proportion.

John Crowley published his first novel The Deep in 1975, and his twelfth novel, Ka: Dar Oakley in the Ruin of Ymr, in 2017. In 1992 he received the Award in Literature from the American Academy and Institute of Arts and Letters. In 2006 he was awarded the World Fantasy Award for Lifetime Achievement and the Mythopoeic Fantasy Award. He has been nominated for the American Book Award and is the recipient of an Ingram Merrill Foundation grant. He taught creative writing at Yale University from 1993 until his retirement in 2018.

“[An] enthralling secret history of the last great rebellion against the Tudor conquest of Ireland...Crowley deftly handles the balance between history and fiction without ever lowering the quality of his excellent prose.”
— Booklist (starred review)

Praise for John Crowley:
"Crowley is generous, obsessed, fascinating, gripping. Really, I think Crowley is so good that he has left everybody else in the dust."
— Peter Straub

"Like a magus, John Crowley shares his secrets generously, allowing us to believe that his book is revealing the true and glorious nature of the world and the reader's own place within it."
— Village Voice

"Crowley writes so magnificently that only a handful of living writers in English can equal him as a stylist, and most of them are poets...Little, Big seems to me as miraculous as Shakespeare or Lewis Carroll: it is as if the book had always been there, the way Falstaff and Humpty Dumpty were there from the start, and Shakespeare and Carroll found them."
— Harold Bloom