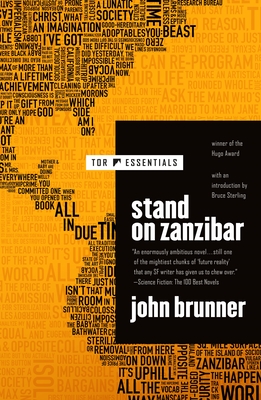 Now in a Tor Essentials edition, the Hugo Award-winning, uncannily prophetic Stand on Zanizbar is a science fiction novel unlike any before in that remains an insightful look at America’s downfall that allows us to see what has been, what is, and what is to come.

“There are certain things John Brunner achieved, which no one has done before or since.” — Bruce Sterling

Genetic engineering is routine, corporations have usurped democracy, technology governs human relationship, and mass-marketed psychosomatic drugs keep billions docile. The systems of the United States are universal in reach and out of control. Every citizen is its victim. . . and its creator.

With an introduction by cyberpunk pioneer Bruce Sterling, author of Distraction and Islands In the Net.

John Brunner (1934 – 1995) published his first novel pseudonymously at the age of seventeen. He went on to publish many science fiction adventure novels and stories. Stand on Zanzibar, winner of the 1969 Hugo Award for best science fiction novel and the British Science Fiction Association award the same year, is regarded as his greatest achievement.