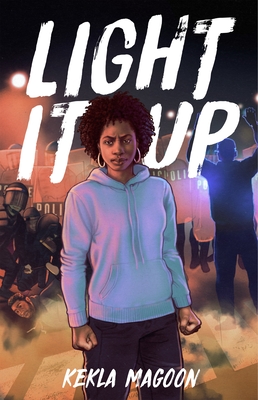 Told in a series of vignettes from multiple viewpoints, Kekla Magoon's Light It Up is a powerful, layered story about injustice and strength—as well as an incredible follow-up to the highly acclaimed novel How It Went Down.

A girl walks home from school. She's tall for her age. She's wearing her winter coat. Her headphones are in. She's hurrying.

She never makes it home.

In the aftermath, while law enforcement tries to justify the response, one fact remains: a police officer has shot and killed an unarmed thirteen-year-old girl. The community is thrown into upheaval, leading to unrest, a growing movement to protest the senseless taking of black lives, and the arrival of white supremacist counter demonstrators.

This title has Common Core connections.

Kekla Magoon is the author of Camo Girl and The Rock and the River, winner of the Coretta Scott King/John Steptoe Award. She is a New York City-based editor, speaker, and educator. In addition to writing fiction, Kekla leads writing workshops for youth and adults, writes non-fiction titles for the education market, and is the co-editor of YA & Children's Literature for Hunger Mountain, the arts journal of Vermont College.

How It Went Down:

“The layered voices tell a story both simple and complicated, heartbreaking and maddening.” —The Chicago Tribune

“A hard-hitting look at the ripple effects of one act of violence on an entire community. How It Went Down is engrossing and real--it's the right book at the right time.” —Coe Booth, LA Times Book Prize winner

“Magoon masterfully captures the cycle of urban violence and the raw emotions of the young people who can't escape its impact.” —Publishers Weekly, starred review

“How It Went Down is a snapshot in time, a fascinating study of people caught in the crosshairs of an 'Event.' . . . A particularly timely tale that can create dialogue and provide understanding about the decisions other people make, and the actions they take.” —VOYA, starred review